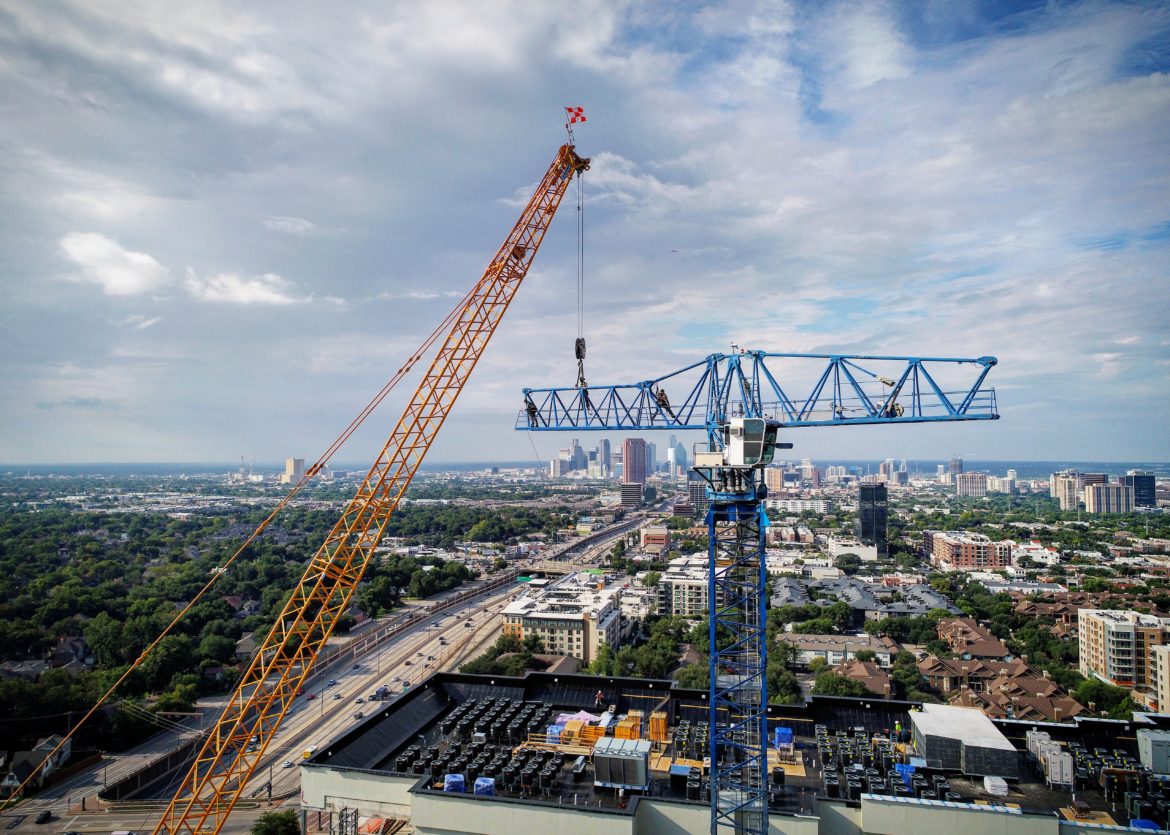 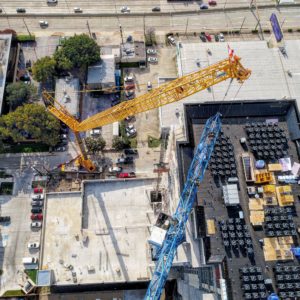 With Dallas-Fort Worth leading the country in apartment construction, tower cranes in North Texas make up almost as much of the skyline as the high-rise buildings. An estimated 80 tower cranes are erected in the region, which local news stations have reported is the most in the country. One of those cranes was recently dismantled by Davis Motor Crane Service, Irving, Texas, and Heede Southeast Inc., Lonestar Division, after construction on The Harvard condominium complex in Dallas was completed.

The Linden Comansa LC400 tower crane on the project was owned by contractor Henry Building Inc., which Davis Crane and sister company Crocker Crane have previously supplied equipment to erect and dismantle its tower cranes. Henry Building also contracted with Heede Southeast Lonestar’s rigging crew to help with the tear down.

For this project, Davis Crane brought in a 600-ton Liebherr LTM 1500-8.1 all-terrain crane, one of two owned by the company and the highest capacity all-terrains in its fleet. The AT was configured with a 155-foot main boom, a 207-foot luffing jib, and 231,000 pounds of counterweight. The crane was working at a 145-foot radius.

At its peak, the tower crane was 320 feet high. “We had three days for the dismantle because the tower crane was so tall, and they weren’t able to jack it down because it was above the building,” said Wes Dowd, operations superintendent for Davis Crane. “Most of these jobs are done on Saturday and Sunday because you have to close the road. We were able to start this on Thursday.”

Mike Kenna, vice president of Heede Southeast, said there were a lot of moving parts on this project because of the tower crane’s height, but the biggest challenge was getting the 600-ton mobile crane on the site. “It was on a narrow neighborhood street with businesses that had to be interrupted while we got the mobile crane in and assembled,” he said. “There were power, telephone, and cable lines that we had to work around. We went through three or four jobsite meetings, measured, double-checked, and tripled-checked. Once we found a good location to setup the mobile crane, it went smoothly.”

Dowd said the Liebherr LTM 1500-8.1 was selected because it is easy to build the luffing jib, and it is able to work around the overhead obstructions. “We couldn’t run a MegaWingLift on our 550-ton (Grove) crane because of the power lines and other restrictions,” he said. “We needed to be able to run that much main boom and luffing jib combination, and still have the capacity at that radius and height.”

Kenna said his rigging crew also had to be mindful of the overhead lines and stay out of harm’s way as they brought the pieces down and loaded the trucks.

Once the Liebherr LTM 1500-8.1 was setup, it first removed the tower crane’s 8,800-pound counterweight and 4,400-pound jib sections. During these lighter lifts, the crane was configured with the 155-foot main and 207-foot luffer. The heavier components were the turntable, which weighed 24,000 pounds, and the 28,000-pound machine deck. “When we made the heavy lifts, we had 138 feet of boom scoped out with the 207-foot luffing jib,” Dowd said.

The crews started dismantling the tower crane on Thursday afternoon and completed the tear down on Friday. The all-terrain crane and tower crane were moved out on Saturday, meeting the tight time constraints of the job.