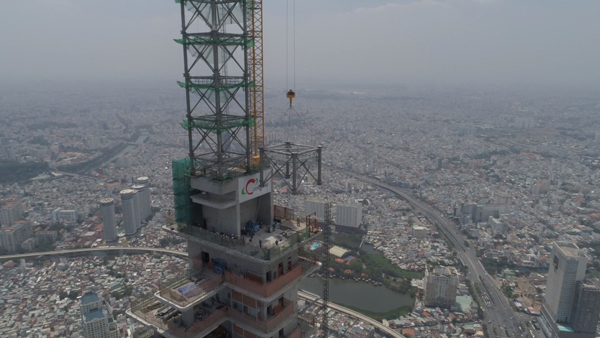 Mace has completed the installation of the spire on the 461m Landmark 81 in Ho Chi Minh City, Vietnam. This is the tallest building in Vietnam and the 11th tallest in the world.

The project’s concrete framework was topped out six weeks ahead of schedule in March, and the final piece of the tower’s 60m spire was lifted into place using a Potain MR 418 luffing jib tower crane.

Mace has been delivering project management services on the project for Vinhomes since 2015.

Landmark 81—which would now tower 150m over the Shard in London—is a mixed-use 81-storey tower containing high end apartments, a hotel, executive floors and observatory decks. It is the centrepiece of Vinhomes Central Park, a development that includes 18 towers in total.

The project has been record breaking since it began, with the earlier stages requiring Vietnam’s largest ever concrete pour. This involved excavating 25,000 cubic metres of soil, installing 6,500t of reinforced steel, and using 17,000 cubic metres of concrete to create the 8.5m thick pile cap for the tower’s foundations. This engineering feat required detailed logistical planning, including the construction of temporary roads and walkways, staircases and specially designed cooling systems.

John Campbell, Mace’s country manager for Vietnam, said: “It’s an honour for Mace to be able to help deliver such an important scheme – and I believe we’ve made a real difference over the last three years, helping to ensure that such a complex job is delivered ahead of schedule.”

originally reported by Sotiris Kanaris, 16 May 2018

On top of the city was last modified: June 28th, 2018 by Dave Peterson
tower crane