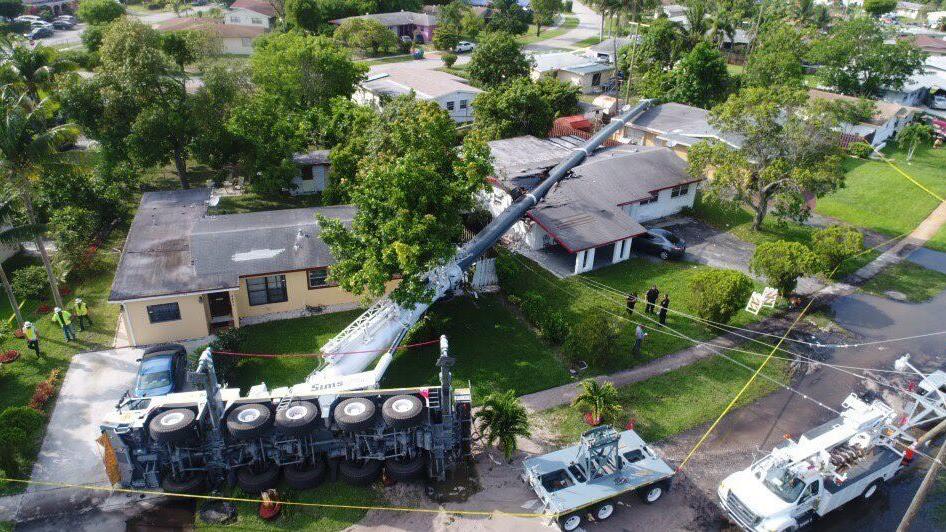 A crane fell over and its boom crashed into two Lauderhill homes, leaving a resident and the crane operator with minor injuries, fire officials said Wednesday.

“He’s lucky to be alive,” Lauderhill Fire Rescue Assistant Fire Chief Jeff Levy said about a man who was inside his house during the accident, near the 1100 block of Northwest 44th Avenue.

A crane fell over and its boom crashed into two homes in Lauderhill Wednesday, leaving a resident and the crane operator with minor injuries, fire officials said.

Power was out in approximately 53 homes in the neighborhood, and a street was flooded after a water main broke, Levy said. 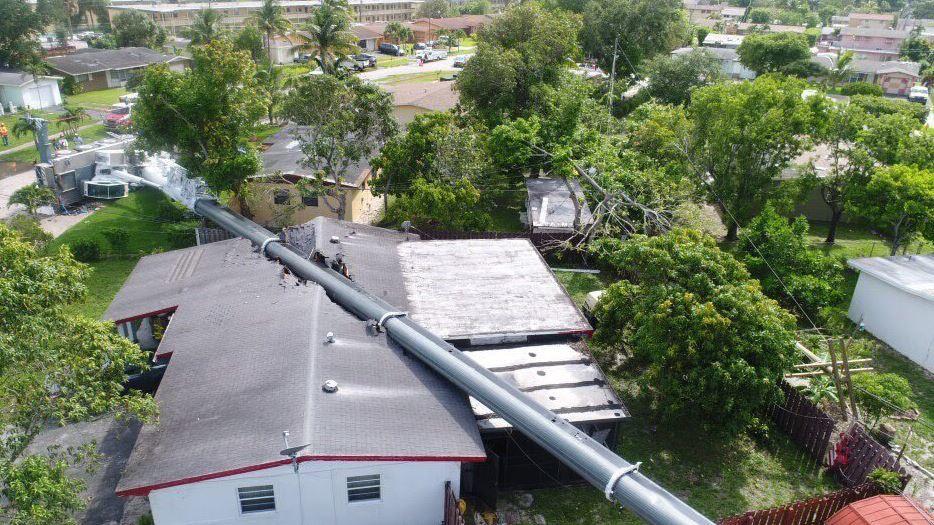 Because of the water main break, a precautionary boil-water notice was issued late Wednesday night for residents in the neighborhood where the crane collapsed.

“I heard a loud boom. I saw this big crane, and it went into the neighbor’s yard and is crushing the house,” said resident Patricca Davis.

Firefighters weren’t letting her back into her home, which doesn’t have power, she said.

“They’ve been replacing the old [utility] poles with new ones since last week,” Davis said.

A crane fell over and its boom crashed into two homes in Lauderhill Wednesday, leaving a resident and the crane operator with minor injuries, fire officials said.

The old poles were in residents’ backyards.

The crane was operated by a contractor working on behalf of Florida Power & Light, the utility said.

“At some point during the operation, the crane lost stability. We’re still under investigation trying to determine what that cause was,” Levy said about the accident that happened about 3:30 p.m. “It lost stability and fell towards the houses.”

The boom landed on one house, damaging the building structure and roof. A roof on a second home was also damaged but to a lesser extent, Levy said. 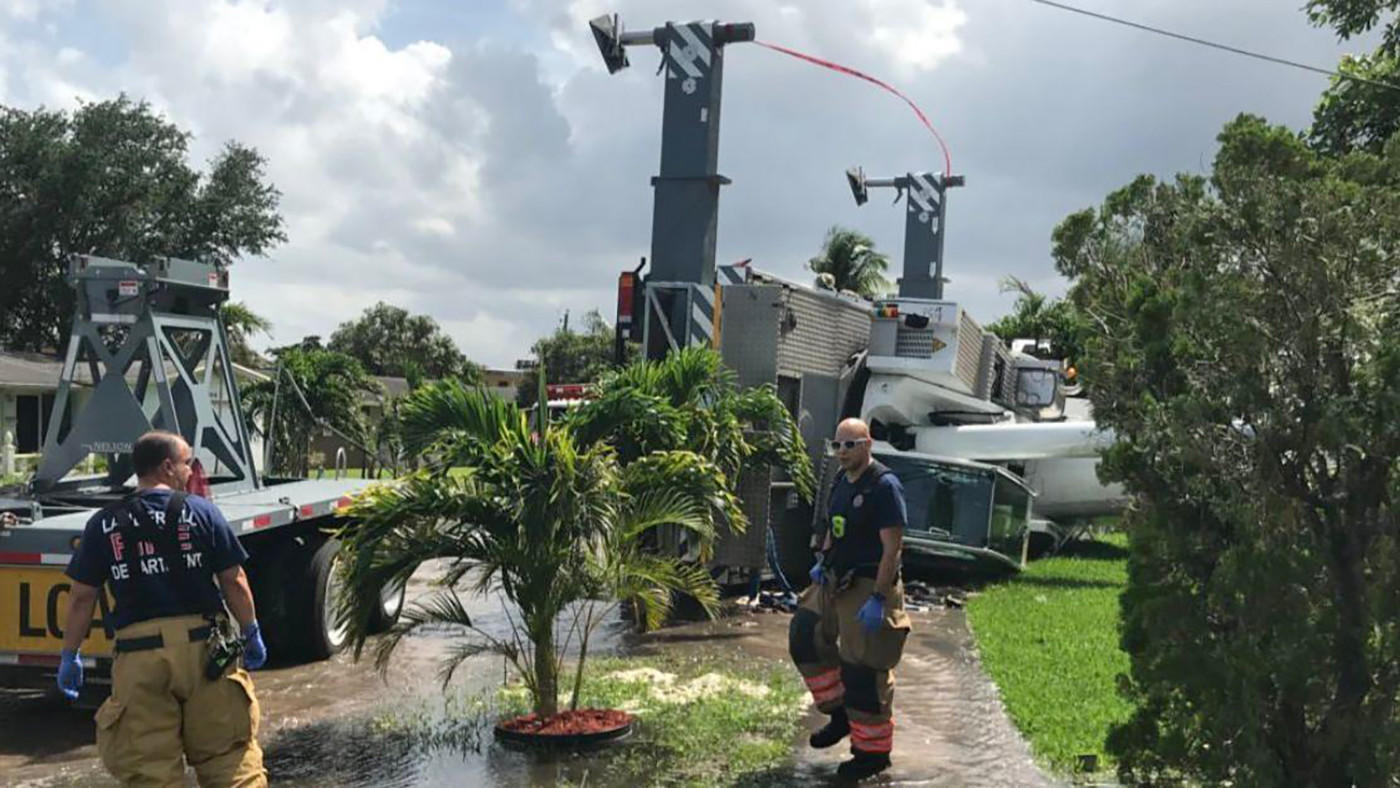 Paramedics treated the crane operator at the scene for minor injuries

The crane cab was on its side and was blocking the avenue.

Paramedics treated the crane operator at the scene for minor injuries. The resident was alert and walking on his own before he was taken to Plantation General Hospital, Levy said.

A Broward Sheriff Fire Rescue dog searched area homes for other victims, but none were found, Levy said. 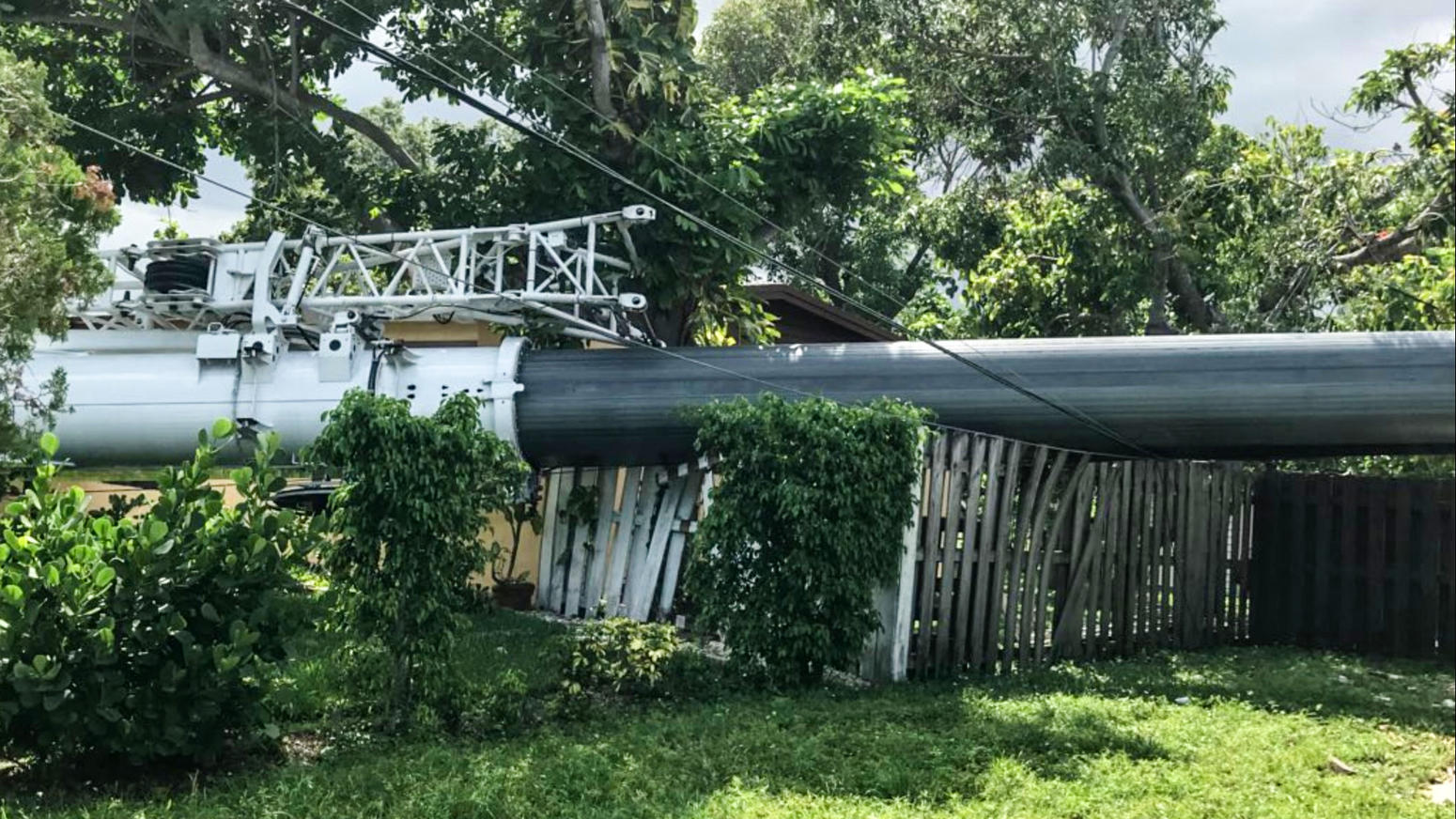 Technical response teams from Fort Lauderdale Fire Rescue and Broward Sheriff Fire Rescue were analyzing how to get the crane upright, and the U.S. Occupational Safety and Health Administration will also be involved, Levy said.

Natalie Smith lives in the 4300 block of Northwest 11th Street with her 86-year-old mother Delores Smith, who was home alone at the time of the crane collapse.

“She heard a large boom that scared her,” Natalie Smith said. “She got up to see what was going on and somebody, fire rescue or whoever, came to the door and told her the crane had hit the house. It scared the bejeezus out of her.”

Smith said their Florida room “is totaled, but I don’t know about the main part of the house,” she said. “They won’t let us go down there.”

The neighborhood is southwest of Lauderhill Mall, north of West Sunrise Boulevard and between Florida’s Turnpike and State Road 7.

Resident within the boundary area should bring to a rolling boil for one minute all water used for drinking, cooking, making ice, brushing teeth or washing dishes. As an alternate, bottled water can be used.

The precautionary boil water notice will remain in effect until officials determine that the water is safe to drink.

Miami Tower Cranes: Could They Have Been...