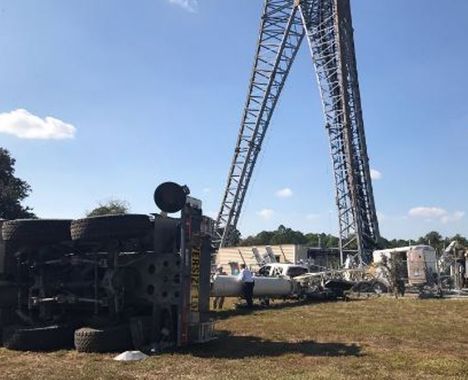 The crane’s outriggers were retracted

The crane, which looks like a 100 tonne Terex AC100-4, was reported as belonging to Allegiance Crane, and the company was on site to work on the recovery. The crane appears from the photos we have received, to have had its outriggers short rigged, with the boom fully retracted and the three part 27 metre swingaway extension in place. It was working on a very large mobile phone tower behind the Toledo Blade animal clinic in the town.

The boom came down across the back of a pick up

As the crane went over, the boom extension landed across the back of a pick up truck and sliced through the back of a van, but thankfully no one was hurt in the incident. Quite why the outriggers were not fully extended when there appears to have been plenty of room on site is a mystery at this point. Police are investigating.

And a van was also sliced in two

Crane over in Florida was last modified: November 18th, 2016 by Ron Selby
all terraincrane accidentfloridaoverturnTerex

New Link-Belt telecrawlers for All Erection