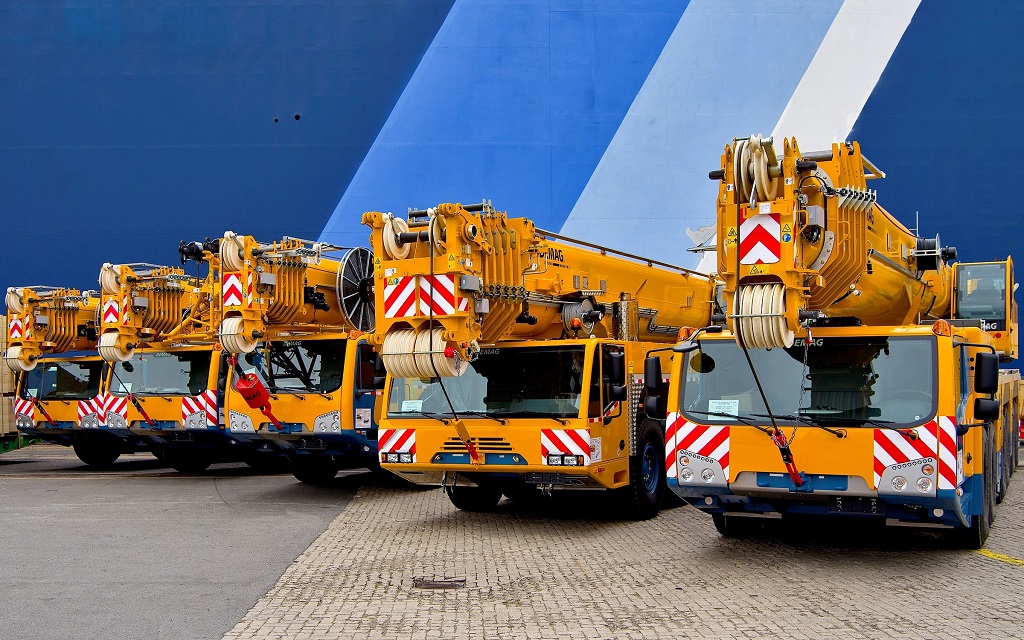 Chilean crane service provider Trex ordering Demag® all terrain cranes from Demag in Zweibrücken is nothing new – after all, the aforementioned manufacturer’s cranes are incredibly popular in South America as well. However, this latest order was special, as it was for six Demag cranes at the same time, with the specific models being the AC 100-4L, AC 160-5, AC 220-5, AC 250-5, AC 300-6, and AC 350-6. For the voyage to Chile, the machines had to be loaded from the Bremerhaven auto terminal, operated by the BLG Logistics Group, onto a roll-on/roll-off ship in the “South America West Coast Service” fleet owned by Japanese shipping company NYK. On top of this, there were 125 accessories, with some of them of significant size, that also had to be brought safely into the ship. Specialized company AHB Atlantik Hafenbetriebe, with which Demag has been working for many years already, took care of this process.

The fact that the service providers involved were tremendously experienced ended up paying for itself: All six cranes, plus accessories, were safely stowed on board and hit the high seas towards Chile as scheduled on May 20, 2019. The trip to the eastern coast of South America, which covered a distance of around 7,726 nautical miles, took around 30 days. Four of the Demag cranes were unloaded at the Port of Iquique, and the remaining two at the Port of San Antonio. Once at their destinations, the cranes from Zweibrücken were handed over to crane service provider and Demag distributor Trex as scheduled.