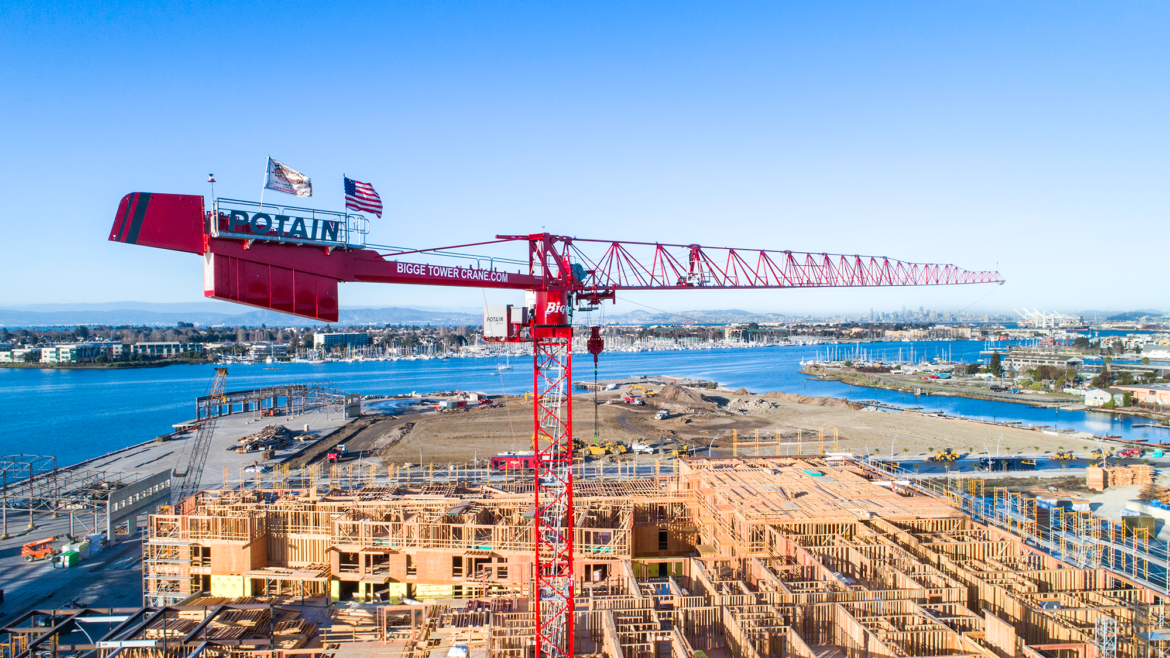 Developers and contractors that use tower cranes now have the chance to rent a brand new Potain MDT 219 J10 from Bigge for their upcoming projects. Bigge officially announced the purchase of the 25-brand new Potain’s from Manitowoc Cranes during a meeting at their headquarters in California. This Potain tower crane is uniquely equipped with various options and features resulting in maximum efficiency on the jobsite.  Bigge’s expansion of their nationwide fleet strengthens its commitment to customers by providing best-in-class products.

According to Jesse Sullivan, Tower Crane and Hoist Sales Manager, “Market demand for tower cranes has increased in the past five years, and our efforts to provide best in class equipment for our customer base continues to be our driving force.  We currently have over 60 tower cranes servicing California, and we expect this to increase because of market demand and the versatility of our fleet.”

The MDT 219 J10, part of Potain’s MDT CCS City Range generation, has the latest set-up and control technology in its class, with a capacity of 11-tons. The CCS system controls crane configuration during installation and provides maintenance reports to the operators once in use. Both the integrated maintenance reports and crane configuration technology allow the crane to have a simple, fast, and efficient assembly, saving time and money.

Bigge currently has one MDT 219 J10 onsite assisting in the construction of the Brooklyn Basin project in Oakland, California. In April 2017, this unit was erected at the construction site and employs a cross base chassis, eliminating the need for a concrete foundation and expensive consumable anchors. The crane is being used to move construction materials including steel, concrete, and lumber.  If you would like to learn  more about this project you can watch the video here. Brooklyn Basin is expected to open in 2019 and is considered one of the leading projects in the Oakland Embarcadero revival movement. This project is one of many currently using various Bigge cranes, hoists, and machinery in the East Bay.

Bigge is also an authorized factory dealer for Potain’s City Class cranes. Tower crane users and business owners can purchase and rent these cranes to take advantage of all their efficient features.

Bigge also offers quality used cranes for sale or rent. Bigge has more than 1,000 cranes in its rental fleet and has over 800 cranes on rent across the nation.

Since 1916, Bigge Crane and Rigging Co. has been the premier provider of crane rentals, crane sales, and specialized heavy lift projects across America. Headquartered in the San Francisco Bay Area, Bigge operates a strategic network of sixteen service locations nationwide, allowing them to provide logistical and field support throughout the U.S. Safety, teamwork, passion, and innovation are part of Bigge’s core values, and its rental and project teams have generations of combined experience in their industry. Bigge Crane and Rigging Co. continues to lead the crane industry into the 21st century and is still managed by the Bigge family.