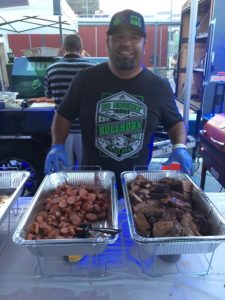 For the second year, Rob Arocha, Tadano America’s senior parts technical representative, competed in the American Royal World Series of Barbecue in Kansas City, Kan. Arocha is the pit master for Bullhorn BBQ in Cypress, Texas. Sponsored by his employer and Tadano dealer Blue Hat Crane of Kansas City, he and his wife, Dianne, traveled from his home to participate in the Open Competition over Labor Day weekend. However, his trek to the Kansas Speedway was bumpy, with the flooding from Hurricane Harvey trapping his family for days, submerging his trailer, and keeping his two teammates from traveling due to water damage to their homes.

In this Five Minutes interview, Arocha and David Lapin of Blue Hat Crane share how last weekend’s barbecue not only brought people together for the competition, but it enabled them to give back to Harvey first responders and hurricane victims.

Tell me a little bit about your trip from Houston after Hurricane Harvey.

Arocha: The storm came in on Friday, and we were locked in our homes from Friday to Tuesday until the water started to recede. We were fortunate that the water only reached the sidewalk and stayed there, but the streets and many houses in our neighborhood were flooded.

We left on Thursday, but before we did, we wanted to give back to the community. On Wednesday, we cooked and fed some of the first responders and National Guard troops in Katy, Texas. We were really happy to do that.

Two of my team members – Jason Drouin and Case Hahn – took on water in their homes and had to stay behind. Case had our trailer, which was surrounded by water, so we couldn’t bring that up.

What normally would have taken an 11 or 12 hour drive took 15 hours on Thursday, because we were stopping along the way to pick up supplies. David at Blue Hat Crane also helped us piece together our supply list before we got up there.

How did Blue Hat Crane help Bullhorn prepare for the American Royal?

Lapin: Rob brought up a lot of the food, but he wasn’t able to bring all of his supplies like plates, serving dishes, and setups for some of the sides. We got him whatever he needed, from ice to lids to utensils. Their trailer was surrounded by water, so we got him a trailer to store everything in for the week.

With the flood, not everyone on his team made it up. I helped him out this year – I was his sous chef – and had the opportunity to learn how to BBQ from a professional.

One of Blue Hat’s customers, Justin Blick with ICM and his wife, Kendra, were there to help and turned in all the plated food to the judges.

Arocha: The competition is really fast paced. In Texas, we have 1.5-hour intervals to turn in food, and for this, we had a 30-minute window. Once you turn a dish in, you are plating the next so it can be turned into the judges. It is really exciting and fun, and it gets your adrenaline going. I enjoy the rush of it. Because we didn’t have our team there, David, Justin, and their wives became crew members. I had a KC Chapter of Bullhorn BBQ last weekend.

It’s a great experience because you are seeing competitors and how your food compares. At the competition, you have to be on your A game. It’s a big challenge, but it’s a lot of fun to do it.

The party atmosphere the night before the competition is great, and we were able to feed over 200 people. It was really good for Blue Hat Crane and Tadano America, and all the guests had a great time.

What did you participate in this year? How did you do?

Arocha: In order to qualify to win the event as a Grand Champion, you have cook chicken, pork shoulder or pork butt, pork spare ribs, and brisket. There are lots of other events like vegetables and sausage, and we also competed in sausage this year.

We placed better our first year, but we will come back to compete. Next year, we’ll be better prepared and go all out with vegetables and dessert. 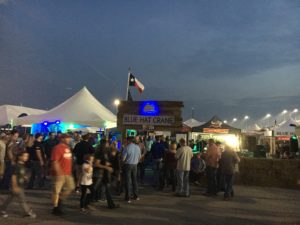 Lapin: Rob was coming up to compete, and we wanted to do an appreciation event for our customers and field guys. The American Royal is the perfect venue to bring everyone together and tell them thank you. Having Rob there is a plus – everyone loves his food and he does a really good job.

We were also able to raise money for Operation BBQ Relief, which is a Kansas City non-profit that got started after the Joplin tornado. They organize feeding first responders, and Rob wanted to raise money and cook for them. We just wanted to do our part with whatever we can do.

Where will you be cooking next?

Arocha: We are big tailgaters, and this weekend is NFL kickoff weekend, so we will be at NRG stadium for the Houston Texans game.