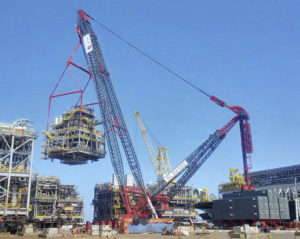 ALE AL.SK350 making its first lift at a yard in Brazil helping to construct an FPSO

The first of around 40 modules was lifted on site at an offshore yard in the south of Brazil. Units weighing up to 3,000 tonnes will be lifted as part of the construction of the P-74 FPSO (floating production, storage and offloading) vessel.

UK-based heavy lift and transport specialist ALE claims its AL.SK350 is the world’s largest land-based crane and that the 3,000 tonne load will be the heaviest commercial load ever lifted by a land-based mobile crane. The maximum load moment rating is 354,000 tonne-metres. It was chosen because its capacity allowed the modules to be installed without having to move the ship’s hull, ALE said, saving time and money on the project.

On this project the AL.SK350 has a 130 metre boom and was rigged with a 4,000 tonne capacity winch system and high speed slewing. Ballast radius was set at 49 metres and it carried 4,000 tonnes of it.

Ronnie Adams, senior project manager on site, commented, “The crane is performing well and exceeding expectations with its high slew speed, in combination with the 4,000 tonne winch system. Despite challenges faced by the weather, we have successfully completed the first campaign ahead

of schedule, recognising the engineering achievements this milestone brings.”