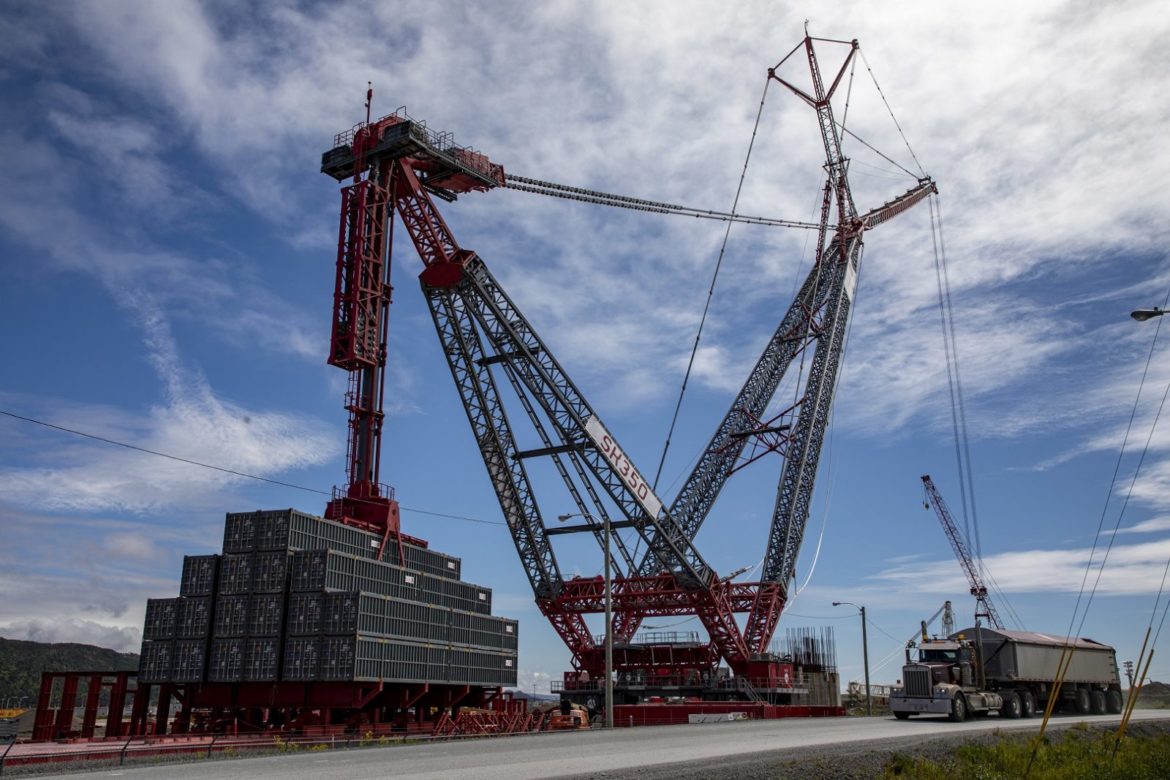 ALE’s SK350 crane is performing lifts on a major oil and gas expansion project in Canada. The design of the crane has enabled it to continue operating in the area’s high wind speeds and across a live construction site.

The West White Rose Project involves the installation of an offshore platform, consisting of a concrete gravity structure (CGS) and integrated topsides. The construction of the CGS, measuring 145m high and weighing over 200,000t in total, is taking place in Argentia, Newfoundland.

The exceptional capabilities of the SK350 heavylift crane led to ALE and the client working together to design a solution that would maximize efficiency and minimize disruption on site, ultimately saving time and costs for the project.

ALE is lifting a variety of components that weigh up to 221t and measure as large as 36m x 36m. The lifts themselves are complex as they cross a live construction site and must negotiate numerous obstructions, including other cranes.

The SK350 has been assembled in its largest ever configuration, enabling it to perform lifts with over 200m of outreach. This outreach, combined with the crane’s heavylifting capabilities, ensures it can lift the components as modulated assemblies from fabrication areas around the site.

Operating from a single location, this enables ALE to lift the modules, rotate 180°, and set them down up to half a kilometer away from their original position. The modules can be lifted directly into their final position, expediting the construction schedule.

An additional challenge for the project is that the island has the strongest wind speeds in the region. Originally, the construction was planned to be performed by tower cranes, but this posed a risk to the schedule as the tower cranes would be limited by the climate.

The design of the SK350 crane mitigates the impact of the wind activity, as it is able to continue operating in high wind speeds up to 72km/h. Being able to withstand these conditions mitigates schedule risk and helps minimize downtime during the construction.

The construction site is compact but as the SK350’s design does not require the boom to be lowered when non-operational, the crane needs only a relatively small area to operate. Numerous other activities are taking place on the site and the crane’s large outreach enables ALE to reduce disruption by assembling it away from other construction areas.

The SK350 crane has been fitted with the optimum equipment for the project’s scope: a 125m main mast, 95m jib and 612t capacity auxiliary winch.

The technology within the project is expected to open new possibilities for oil development. Initial oil from West White Rose is expected in 2022.