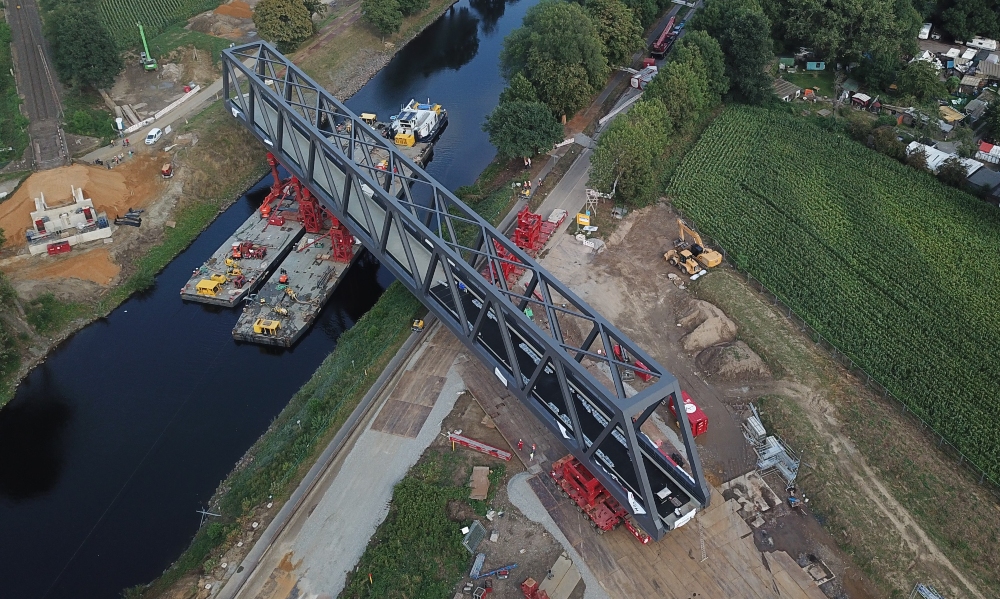 Duisberg Hauptbahnhof serves approximately 110,000 passengers daily and lies at the meeting point of many important national and international railway lines. Just north of this station, seven lines run to crossings of the River Ruhr.

Having been built in 1920, two of these girder frame bridges needed to be replaced, and afterwards a new bridge was to be launched, on a congested site over shallow waters. With its experience in undertaking projects while minimising disruption, ALE was well placed to assist.

The bridge was lifted from its bearings using the stroke of the SPMT, and a 75m transportation performed over rough terrain to an adjacent site. From here the 150t, 35m long structure was lifted in tandem by two 350t cranes to ground level, allowing it to be demolished.

The second, 450t bridge was then removed. To achieve this, a configuration of pontoons was prepared half a kilometre away, consisting of two stabilisation pontoons and a lifting pontoon equipped with the Mega Jack 800 system, winches and ballast pumps.

This flotilla was maneuvered underneath the bridge using the winches, then the Mega Jack 800 was raised to a height of 10m, allowing it to lift the bridge from its bearings. Following transportation to the quay, the bridge was jacked-down to the fullest extent possible with the Mega Jack 800, and then, using eight 150t climbing jacks, to a total clearance of 0.6m between pontoon deck and bridge girder.

The combined height of all items was 10.3m, allowing the 75m long bridge to pass under the A40 highway en route to its demolition point.

The engineering expertise of ALE allowed the new bridge to be built just 75m from its installation site and then lifted a short distance into place, helping reduce overall disruption during the construction project.

From a starting position 1.5m from the ground, the 1,600t structure was lifted to 5.7m using four 500t climbing jacks. This allowed two sets of SPMT equipped with Mega Jack 5200 beams to be driven underneath the bridge structure, and then lift it using the stroke of the SPMTs.

Meanwhile, two pontoons were prepared with support structures 9.5m high, topped with four 650t cylinders each. The new bridge was driven towards the water’s edge until a sufficient overhang was in place to allow the first pontoon to be positioned underneath the overhanging section and take its weight.

A similar procedure was then performed, whereby the bridge was brought to overhang the opposite bank and was then lifted by SPMT there, positioned transversely to allow the bridge to be maneuvered to the correct angle.  Having been correctly oriented, the bridge was transferred to four 500t climbing jacks and jacked-down onto its final bearings.