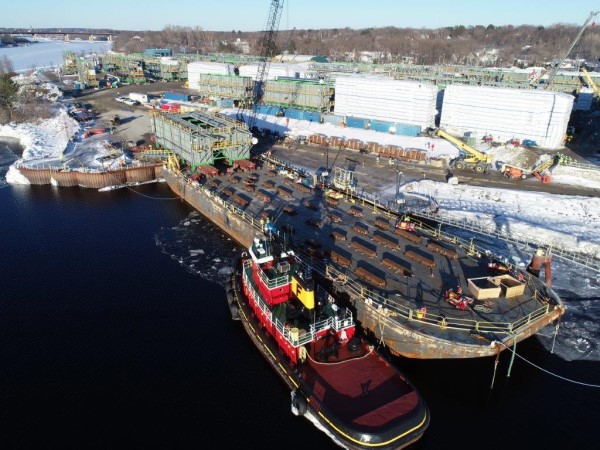 Mammoet has successfully completed the weighing and loading of 60 modules for Cianbro’s furnace shipment project at their module manufacturing facility in Brewer, Maine. The modules are destined for a major petrochemicals plant in the USA.

Mammoet proposed a new wireless weighing technology as it provided the most cost-effective and efficient approach for the weighing scope, in turn benefitting the overall project schedule.

For the task of weighing 60 modules one-by-one, having wireless load cells provided efficiency and reduced congestion onsite while improving safety. Without wires, there were fewer obstacles and potential hazards on the work site and setting up the system saved time, because there were no wires to run. Prior to the start of the project, Mammoet worked with the wireless weighing technology fabricator to slightly modify and customize their design, in order to meet Mammoet requirements ensuring safe and flawless execution.

The weight of the modules varied between 30t and 175t each, and the heaviest module was 105’ x 53’ x 30’ x 384,000 lbs. (32m x 16m x 9m x 175t). Over the entirety of the project, 72 axle-lines of SPMT were used to transport the weighed modules onto barges. Modules were divided into 18 barge shipments, which were loaded over a period of ten months. Due to a tidal difference of up to 16 feet (4.87m) between high and low tide, only one module was able to be loaded per day before the tide would again be too high to safely execute barge loading. Despite the tide and frequently uncooperative weather, Mammoet was successful in completing the project a week ahead of schedule, on budget and incident free.

Sam Quisenberry, Business Development Director for Mammoet USA South stated, “Cianbro’s expertise and professionalism is evident in the work they do at their pristine and impressive module manufacturing facility. Mammoet is pleased to have partnered with Cianbro for the execution of this project, where we were able to employ a combination of our heavy transport and weighing equipment and our expertise to overcome logistical obstacles and bottlenecks.”