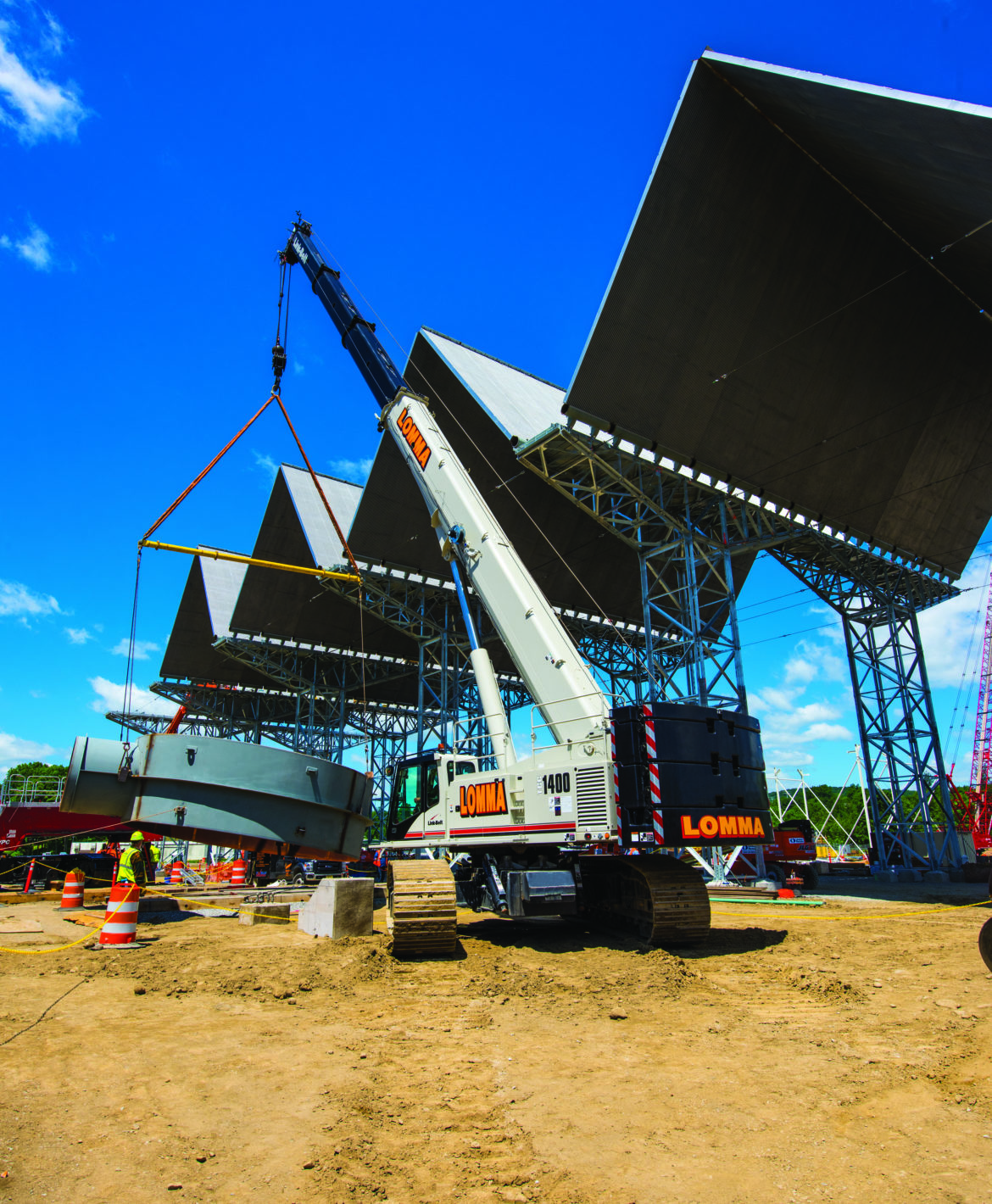 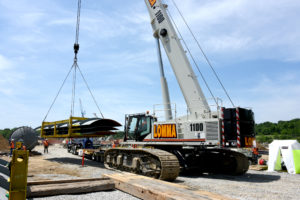 A Link-Belt TCC-1100 lifts a stack of pipe sections at the CPV Valley Energy Center.

In the Lower Hudson Valley about 65 miles northwest of New York City, a joint venture with Skanska, Burns & McDonnell, and ECCO Enterprises is building CPV Valley Energy Center. The combined cycle power facility will have a gross capacity of 675 megawatts, producing enough electricity for 600,000 homes and more than 400 commercial entities.

State-of-the-art green technology is being used with two Siemens F Class combustion turbine generator sets and one steam turbine for the nearly $1 billion project. The steam turbine generator will have natural gas-fired duct burners for additional electrical production during peak periods of energy demand. ACC (air cooled condenser) piping up to 24 feet in diameter and up to 150 feet long will be used for the combined cycle power facility.

To help unload, sort, and assemble the piping shells at various locations, two 140-ton TCC-1400s and a 110-ton TCC-1100 telescopic crawler cranes are working on the project.

All Link-Belt TCCs have complete 360 degree pick-n-carry charts to easily maneuver around the jobsite. While relocating ACC pipe sections, the TCC-1400 was able to work between concrete pipe footing pedestals due to its 360-degree pick-and-carry load chart. Pipe sections weighing between 28,000 and 48,000 pounds were lifted at a radius up to 40 feet with 84.5 feet of boom.

When not assisting the TCC-1400 dedicated to lifting ACC pipe, the TCC-1100 travels to the far end of the complex to offload skids and transport trailers loaded by the second TCC-1400 at an off-site laydown yard. The skids include large duct shells that weigh as much as 42,000 pounds.

Joe Uva is Skanska’s regional crane director and was responsible for the specs on the project and bringing in the Link-Belt TCCs for the project. “Many times, team members don’t realize the advantages and benefits of a telescopic crawler crane,” he said. “From past experience, I know what I can get out of cranes like this when I have low angle work, as I have on this job, beneath unfinished construction or buildings. The (TCC) crane’s mobility, and the amount of time that the company saves in moving in and setting up, and their low boom angle chart really brings a lot to the table.”

He added that the TCC cranes are versatile and easy to move around the job. They cut down on setup time and the need for extra personnel on site to move the outrigger pads. “The operator is not worried about telescoping out, and setting up in the right place,” he said. “He just moves quickly to the right position. There is a tremendous amount of savings by using these machines.”