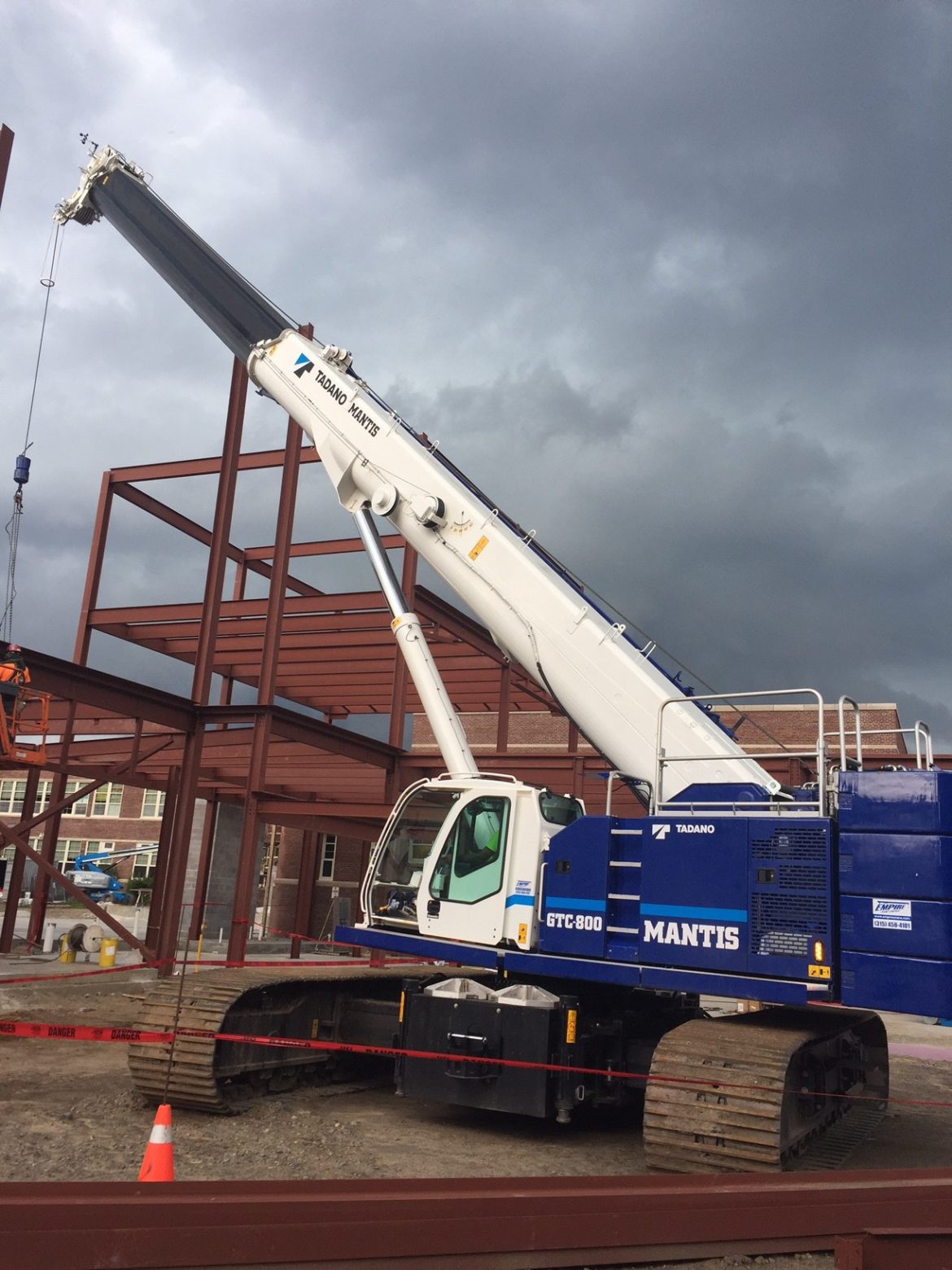 In spring 2016, Tadano Mantis Corp. introduced the 88-ton GTC‐800 telescopic-boom crawler crane to the global market. The unit is the second in its newly designed GTC Series telescopic crawlers. The units are built to meet the needs of power transmission, bridge and civil, and foundation construction, while also creating a broader appeal for general lifting applications.

Operating load charts for the GTC‐800 are available for up to 4° slope with automatic out-of-level load chart switching. Level ground load charts feature a 1.5° slope allowance.

The GTC‐800 is powered by a 310-hp Cummins QSB6.7 Tier 4 Final diesel engine. Engine throttle control is by either auto‐idle control, adaptive throttle control, or by foot pedal control. The load sensing, power controlled hydraulic system optimizes the hydraulic output to the diesel engine power output for highly efficient operation and control. The swing system is controlled by a separate closed loop hydrostatic transmission for superior swing performance and the maximum swing speed is 2 rpm.

Opti-Width allows for an infinite combination of track positions. Continuous position data of each track frame relative to the crane centerline is provided to the AML‐C rated capacity indicator. The AML‐C chooses the correct load chart based on track position of each track frame so the capacity of the crane is optimized through 360 degrees. Zoned load charts are provided based on asymmetrical track position setup and slewing soft-stop safety function is used when capacity is limited at the edge of an operating zone.

According to Jonathan Shufelt, sales representative with Tadano Mantis dealer Empire Crane Co.: “With the Opti-Width, you can reduce the track width on the go to get around obstacles on the jobsite. The crane is is easy to move on site, and you don’t need outriggers or cribbing, which can add about a half hour during crane setup.”

The undercarriage has sufficient hydraulic track extend power to extend and retract the tracks on demand, and the tracks do not require pinning in position once set to the operating width.

The travel system features two‐speed track drives with maximum speeds of 2.23 mph and a maximum unladen gradeability of 78%. The standard track shoe is a 35.4-inch-wide, three‐bar semi‐grouser, and an optional 31.5-inch-wide steel flat shoe is also available.

Shufelt said the crane can be moved in three truck loads without the need for an assist crane to build it, unlike a traditional crawler crane. “It can be erected in about an hour with three people, saving on setup costs,” he said.

Site clearing on the $79 million facility began last October, and the complex is being designed to allow for future expansion and more-efficient operations. It is replacing the current sheriff’s office in Monticello, with a jail house dating back to 1909. The state-of-the-art jail will have no iron bars. Instead, cells will consist of steel doors and glass, and they will operate electronically. The pre-cast concrete cells were delivered in June to house at least 256 single-bunk inmates.

A new Tadano Mantis GTC-800 was delivered this week to American Crane & Rigging LLC and bare leased to American Iron Inc. in the state of New York by Empire Crane Company. The 88-ton telescopic-boom crawler crane will be erecting steel on the new Sullivan County Jail.

Michael Hoy, who owns both American Crane & Rigging LLC and American Iron Inc., said the 88-ton telecrawler’s self-assembly takes only a fraction of the time that it would take a conventional rig in this class, and the hydraulic boom allows this crane to be built in a smaller footprint unlike conventional crawlers.

“With adjustable load-charted track spans, pick-and-carry, out-of-level load charts, and no outriggers to crib, these cranes have advantages over RTs as well,” Hoy said. “This rig fits our erecting steel and our rental market needs perfectly.” He added that it can also be used for pile driving.