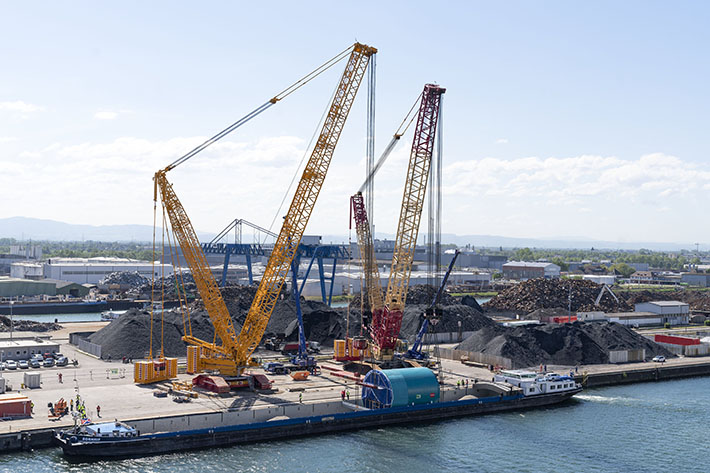 An industrial port was opened in May 1900 at Kehl in Baden-Württemberg. In May this year, this small border town on the German side of the River Rhine near Strasbourg was the venue for another impressive event – two crawler cranes moved cargo weighing around 900 tonnes onto a barge in a spectacular tandem hoist. “Never before in almost 120 years of its history has such a heavy item been handled at our Rhine port using cranes”, says Jürgen Preiss. And Preiss, a member of the port management team, knows exactly what he’s talking about. The load he is referring to was the core piece of a gigantic tunnel drilling machine built by Herrenknecht based in Schwanau, Baden-Württemberg. Two powerful crawler cranes from the Liebherr Plant in Ehingen were required to tackle this job.

One LR 11350 crane and another from the LR 11000 series were on show in Kehl, representing the second and third-placed cranes in the current rankings of the most powerful Liebherr crawler cranes. Because it did not have a crane of its own in this class available, the German subsidiary of Dutch heavy load specialist Mammoet engaged for the job had to obtain the LR 11350 from crane rental company van Adrighem. The 1000-tonne crane was hired from Wiesbauer, a crane service provider based in southern Germany.

Overall, therefore, there were two cranes at the site with a total lifting capacity of 2350 tonnes or an impressive 37,919 tonne-metres of load moment – in other words a great deal of crane power in a small space. The two heavyweights had arrived on barges using the inland waterways. Whilst the components of Wiesbauer’s crawler crane were put on board for the short trip from Mannheim, the LR 11350, still in the livery of its original owner, Scottish crane contractor Weldex, was loaded onto a barge in Rotterdam from where it was shipped to southern Germany.

A total of 1600 tonnes of ballast used

When they arrived, however, the crawler cranes not only had to be assembled and prepared. In addition, the various components of the nine-meter diameter tunnel drilling machine, which they had to load, had to be transported from the Herrenknecht factory in Schwanau 30 kilometers away and then assembled at the Rhine port of Kehl. The heavyweight components included the core piece of a tunnel drilling machine, consisting of the front blade area with all its components and installations such as the cutting wheel, drive and erector, a device for installing the tunnel shuttering. The handling and transport work required the installation of a so-called blade cradle underneath the earth drill.

This blade cradle also contained the fastening points for the attachment equipment on the two crawler cranes. This is where the extremely heavy steel ropes, as thick as a man’s leg, were secured using massive shackles. The experienced team from Mammoet required several hours to hoist the machine onto the barge as placing a further 300 tonnes of steel onto the suspended ballast pallet of the LR 11350 during the slewing process proved to be an extremely time-consuming undertaking. A considerable number of counterweights was required since the load had to be lowered into the hold with a radius of around 30 meters – during the final phase of the hoist, the two cranes had a total of 1600 tonnes of ballast.

This radius resulted from the large distance between the two cranes and to the barge and was based on the structural strength of the loading platform. As a result of the enormous ground pressure, the load capacity of the ground in this area had to be recalculated to find safe areas for the crawler cranes to be positioned. It was a masterful performance by the two heavyweights to achieve this significant radius with an imposing gross load totalling around 950 tonnes on the hook.

The subsequent journey on the barge to the Dutch coast then took five days. When it arrived at the port of Rotterdam, the large drilling machine was unloaded by a floating crane. In November it will then be shipped over the English Channel to build a tunnel in Great Britain.

The two enormous crawler cranes, with their lattice booms projecting around 60 meters into the sky, naturally attracted a whole host of crane spotters to the Rhine. For these fans of crane jobs and heavy haulage of all kinds and their cameras, a visually impressive tandem job like the one in the Rhine port of Kehl was a massive, yet rare highlight. “It’s like Christmas and Easter coming together,” said one young man from the crowd. And his friend continued: “A 11350 and a 11000 – I’ve never had so much power in front of my lens before. Never.”