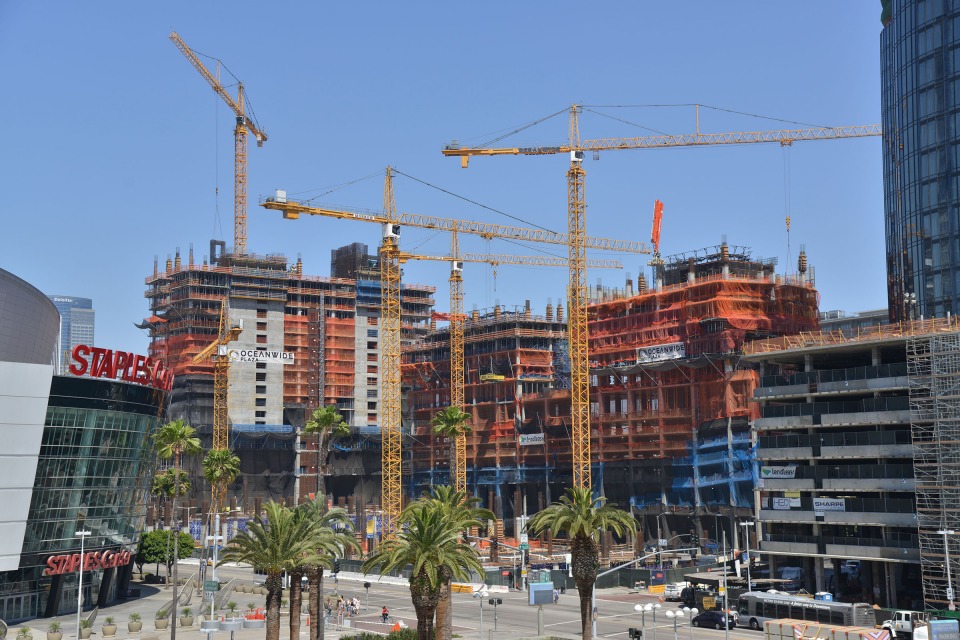 Los Angeles is experiencing a new Golden Age, but instead of the glitz and glamour of Hollywood, this time it is a development renaissance.

In downtown Los Angeles, one of the most high-profile construction projects is the Oceanwide Plaza development. Once the project is complete, the plaza will be home to the new Park Hyatt Los Angeles; a retail center that has a 50-foot open-air galleria and a third-floor deck overlooking the Staples Center and LA. Live; and modern residences that feature a two-acre, park setting above the shopping area. The Oceanwide Plaza hotel will rise 49 stories with the two adjacent residential condominium towers reaching 40 stories.

A recent news report said the $1 billion Oceanwide Plaza project’s three towers have risen to 25, 26, and 21 stories. Other work being done currently is the curtain wall system, which is being used in place of a more typical window wall system seen on most downtown L.A. towers. Once the glass panels arrive, they are prepared and moved to the edge of the building’s floorplate, and a mini-crane lifts the panels and moves them into place. The process is repeated 146 times per floor and takes about five days.

Five Liebherr hammerhead tower cranes, supplied by Morrow Equipment, are also in full production on the Oceanwide Plaza development. Working with Webcor Concrete, Morrow has partnered with the concrete contractor on numerous projects in the past. The Liebherr tower cranes models selected for the job included three 316 EC-H 12 Litronic, a 550 EC-H 20 Litronic, and a a 550 EC-H 40 Litronic, which provide complete coverage on the 4.9 acre project site. These tower crane models have free-standing heights, tie-in spacing, versatile climbing system,  and heavy lifting capacities.

Oceanwide Plaza development began construction in March 2016 and is expected to be completed in 2018.

Watch as the window curtain is added to Tower 1.