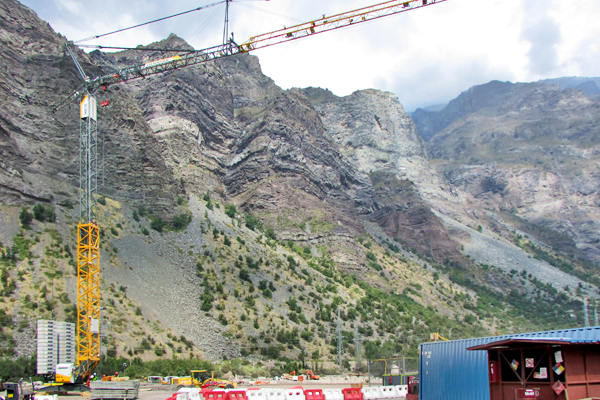 A Liebherr 53 K self-erecting crane is currently working on the construction of two hydroelectric plants as part of the “Alto Maipo” project in the Andes to the east of Santiago de Chile. The concrete wall to reroute the river is being built using the first 53 K in the country.

Building contractor Strabag decided to use the 53 K self erector with a maximum radius of 40 meters and a maximum load capacity of 4.2 tonnes for a number of reasons. The company has had positive experiences using Liebherr tower cranes, and the bottom-slewing crane was selected over the top-slewing cranes that are normally used there because the rope kinematics can be assembled quickly, and Liebherr Chile agreed to assemble and provide service for it.

Since the crane will change position several times during the three-year construction period, both features are important. On the same site, a Liebherr 85 EC-B 5b flat-top tower crane manufactured in Brazil is being used as a storage crane.

Water in the 67 kilometer tunnel systems will drive the generating turbines parallel to the river, which are being built at a depth of 800 meters for the hydroelectric plants. In addition, 17 kilometers of high tension cables will be installed.