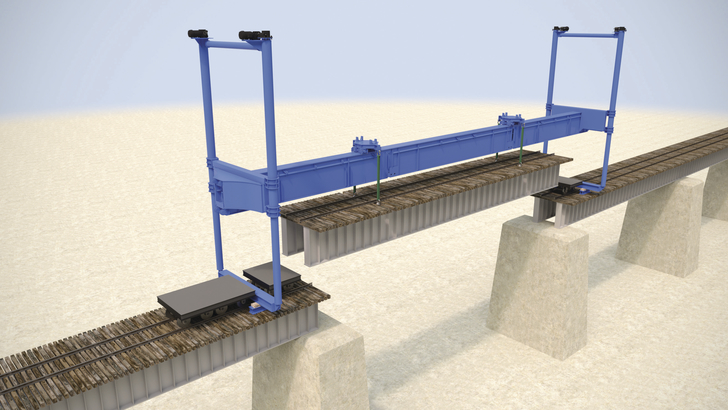 Engineered Rigging has launched its new Rapid Bridge Replacement System, which enables railroads and their maintenance contractors to exchange a railroad bridge span in a single day. In addition to substantial timesavings, the system also provides a safer method for bridge replacement than hydraulic cylinder approaches.

Unlike hydraulic cylinder lift methods, the Rapid Bridge Replacement System installs on top of the rails, rather than under, eliminating the need for extensive below-rail modifications to adjacent sections. The enclosed lift girder doubles as a safe passageway for crews crossing the bridge once the span is removed.

Crews construct the modular system on a nearby spur so rail service is not interrupted during set up. The system assembles in three to four shifts, ships on four or five legal flatbed trailers and requires no special permits.

“Depending on the number of spans, railroads can safely and efficiently replace a complete bridge in days rather than months,” explained Bogdan Gaita, vice president of Engineered Rigging.

This mechanically engaged lift system operates without cable drums or strands, which can fail, or hydraulics, which can leak. Its self-locking lift columns result in synchronized lifting and positive mechanical engagement. Even during a power outage, the lift columns remain stable. Plus, the system’s remote operation enables crews to control lifting and transport from a safe distance.