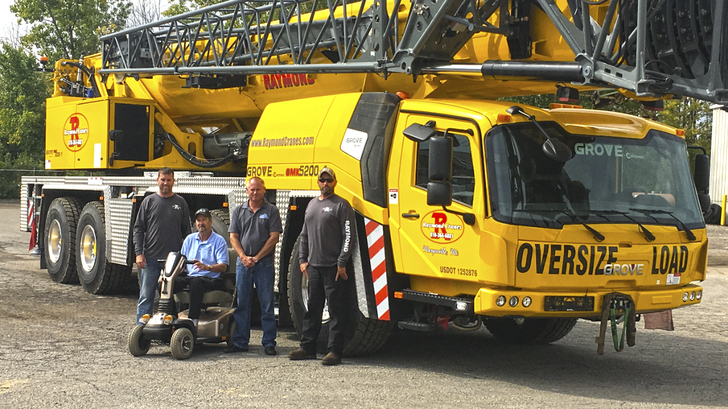 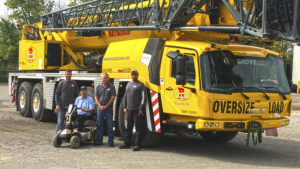 Raymond Excavating has taken delivery of a Grove GMK5200-1 all-terrain crane in an effort to respond to customer needs in the east, central and southeast parts of Michigan. The Marysville-based company received the crane in March of 2016 and immediately put it to work to assist with a variety of lifting jobs, including placement of HVAC units, large concrete box culvers and installation of communication towers that stand as tall as 200 ft.

The move comes 48 years after Raymond purchased its first Grove, a 15 USt TM215 truck-mounted crane, which enabled the business to introduce lifting services to its customers. Today, all of Raymond’s nine cranes are either Grove or National Crane-branded, and owner and president Dave Burgess said that he has relied on Manitowoc for returns on his crane investments over the years.

“We count on cranes that can meet our capacity needs while being able to easily travel on regional roads in this part of Michigan,” he said. “The GMK5200-1 delivers on both fronts: its 240 USt capacity is plenty for most of our customers’ needs and its mobility allows us to access job sites where other cranes might have a harder time fitting.”

Mike Meagher, crane specialist at Walter Payton Power Equipment, which supplied the crane to Raymond, said the excavating and crane rental company takes pride in the longevity of the business, which was founded in 1954 by Raymond Burgess—father of Dave Burgess—who is retired but still maintains an office on the premises.

“There are many relationships between Raymond Excavating and its customers that go back to when the company was started,” Meagher said. “Those relationships are at the heart of its business model of dependable and consistent service. The family works together to ensure the quality that their longtime customers have come to expect.”

Released in 2015, the five-axle Grove GMK5200-1 was one of the first ever mobile cranes to feature the VIAB turbo clutch module, which eliminates fluid overheating and clutch burning as it delivers improved fuel economy. The VIAB module also enables class-leading maneuverability and driver comfort by working in tandem with the crane’s integrated retarder, resulting in wear-free braking and starting.

Other features on the GMK5200-1 include interchangeable counterweight slabs, a self-rigging auxiliary hoist and a 210 ft main boom that offers a stronger reach and load chart than many competing five-axle cranes.