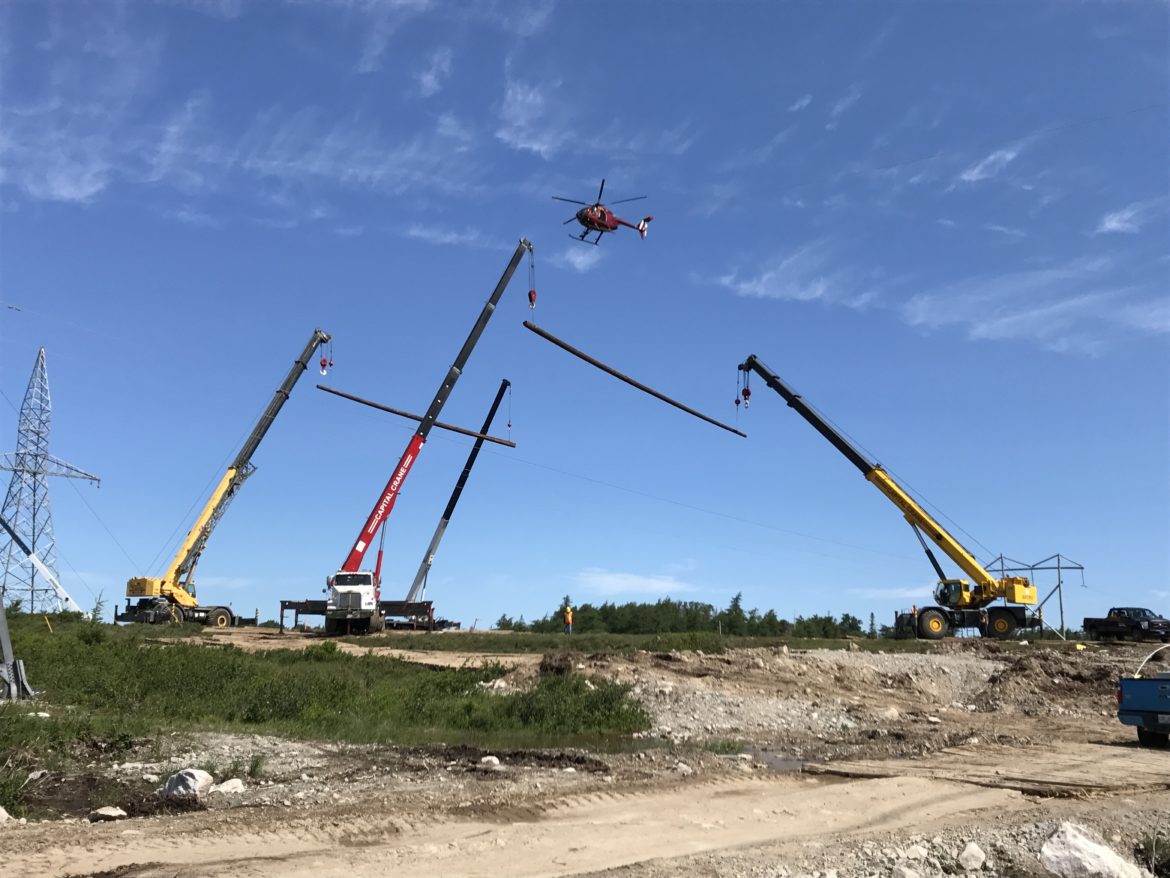 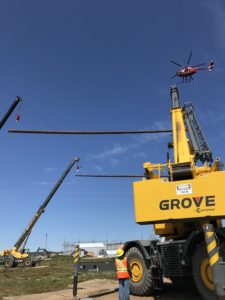 Nalcor Energy, Newfoundland and Labrador’s energy company, is currently developing the lower Churchill River to be a source of hydroelectric power for the province. Once the Lower Churchill Project is complete, the two installations at these locations will have a capacity of more than 3,000 megawatts, and they will be able to provide 16.7 terawatt hours of electricity a year, as well as reduce greenhouse gas emissions equivalent to taking 3.2 million vehicles off the road each year.

As the project progresses, transmission towers and utility lines are installed to carry the electricity. Newfoundland-based Capital Crane Ltd., the largest crane rental company in the region, currently has seven all-terrain cranes erecting transmission towers. Once the towers are up, they provide even more cranes to complete the stringing operations for Valard Construction.

“Stringing is usually done by just a chopper, but whenever they have to cross new lines over existing live transmission lines, we send various units out to hoist the 80-foot wooden poles on either side of the live line,” said Kayla Monks, operations manager/senior HSEQ advisor for Capital Crane. “This is done because if the new line sags, it will sit on the wooden poles and not drop and touch the live 230Kv transmission lines underneath.”

On a recent stringing job, Capital Crane brought in two 50-ton Elliott 50105R boom trucks on Western Star chassis, a 60-ton Grove 700E rough-terrain crane, and an 80-ton Grove 880E RT to perform tandem lifts. “We chose these from our fleet to assist with stringing ops because of their boom lengths more so than capacity and for their availability,” Monks said.

The site was extremely challenging. “We were set up in a bog, so many rig mats had to be used to prevent the units from sinking,” she added.

The cranes were staged to perform two tandem lifts, with two units on one side of the live line and the other two on the opposite side. Monks said the 80-foot poles weighed about 2,000 pounds. The two Elliott boom trucks had a radius of 60 feet, and the Grove RTs had a radius of 70 feet.

“Safety was a must, considering we are hoisting near high-voltage transmission lines,” she said. “All operators hold valid power line hazard cards and maintained a minimum distance from lines, as required. All units were grounded out to ensure safety.”

Monks noted that the company has had cranes on every portion of the Lower Churchill Project, including Churchill Falls, Muskrat Falls, Forteau, Shoal Cove, Bottom Brook, Granite Canal, and Soldiers Pond, which are various switchyards and converter stations along the line. The transmission portion of the project is expected to be completed by mid-2018.