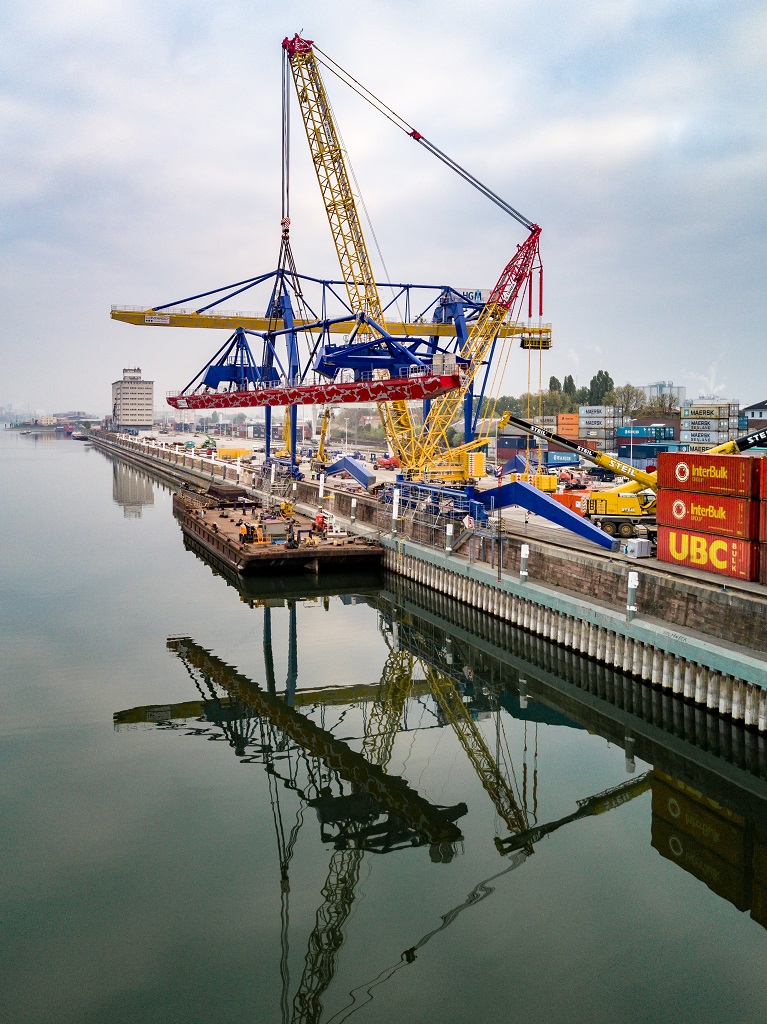 Two dockside cranes were bound for assembly and installation at the Port of Mannheim. Before this could be done, one of the massive crane girders had to be loaded at the Speyer Port and taken to Mannheim by ship. German crane company Steil used a Terex Superlift 3800 for the jobs.

Steil was one of the first companies to buy this crane model, which is now called the Demag CC 3800-1. Since its initial purchase, the company has acquired more units and now has seven in its fleet.

The crane immediately demonstrated its flexibility when loading the 78-meter-long, 105-tonne crane girder onto a pontoon at the Speyer Port. The required radius could increase by up to three meters if the load were lifted from the heavy goods vehicle and onto the pontoon at low tide. In contrast to a mobile crane with its full counterweight, increasing the Superlift 3800’s counterweight and radius would enable the crane to take care of the lift. “That’s why we planned with a variable Superlift counterweight of 65 to 125 tonnes,” Sebastian Sehl, project manager for Steil. “That allowed the crane to work flexibly with a radius of 28 to 30 meters and made sure that the job would still be feasiblem, even at low tide.”

On a Saturday morning, the team lifted the crane girder and other components onto the waiting pontoon with ease. After this, the pontoon headed to the Port of Mannheim, where the Steil team and the Superlift 3800 would continue with the project.

The Steil team was tasked with erecting two container cranes at the shipyard, which meant lifting a number of components including the crane girder loaded in Speyer. For the first step, the hinged legs for dockside crane 1 were erected with the help of two assist cranes. At the same time, the fully assembled, 241-tonne crane girder was lifted with the 54-meter main boom on the Superlift 3800. The crane was equipped with a 50-tonne central ballast, 165-tonne superstructure counterweight, and 54-tonne Superlift counterweight. This configuration enabled it to pick up the fully assembled crane girder, lift it 30 meters, and then move with load about 15 meters.

“During all this work, the crane had to hold the heavy crane girder in the required position without the girder swinging back and forth, which definitely was made more difficult by the wind hitting them, but never to the point that it became critical,” Sehl said.

The next step was to bring the 15-tonne trolley onto the runway girder. Two 200-tonne cranes were used for this job. “This enabled us to set up both dockside cranes within the required timeframe. During the entire process, the Superlift 3800 in particular proved once again to be the perfect choice, thanks to its enormous power reserves and flexibility,” Sehl said.