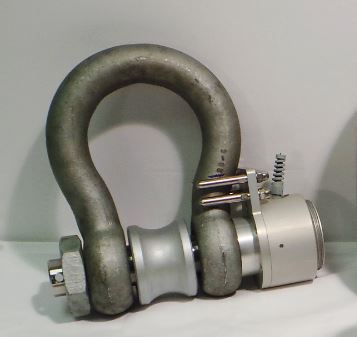 Documented load testing is required by OSHA to ensure that a crane is capable of handling the load being suspended. For third-party crane inspectors, load testing is traditionally performed using a certified weight or calibrated load cell. Finding a certified weight can be cumbersome, and the dynamometers present their own challenges by requiring specific-sized shackles to fit the strap load cell.

Bono Salas, who performs hundreds of crane inspections every month and services some of the biggest names in the oil and gas industry, said that many inspections are done in the field or at the customer’s facility. “We have up to 175-ton load cells, but that doesn’t mean I have 175-ton shackles in the back of my truck or can carry them on a plane,” he said. “The customer will have to facilitate them.”

The president and owner of National Crane Compliance Inspections Inc. saw an opportunity to minimize steps in the inspection process by using wireless load shackles for his inspection and NDT testing business. “With the Rayco-Wylie shackles, you add it to the hook, run the rigging through it, and scale it,” Salas said. “It minimizes steps and labor, and you get the same end result.” After a customer didn’t have the right-sized shackle for the load cell he brought along for a test, he decided it was time to pull the trigger. Earlier this year, he purchase three Rayco-Wylie w880 wireless load shackles.

Rayco-Wylie w880 wireless load shackles have a 6x WLL safety factor and a 200% proof load, lightweight aluminum construction. The load pin shackle is made of high-tensile, Grade 6 steel that is quenched and tempered. Featuring a 500-meter communication range, the wireless load shackle uses three AA alkaline batteries in the load link and four AA alkaline batteries in the handheld display. To record the load test data, a USB tele-receiver can be plugged into a computer, where it logs and stores the test results. A basic logging package is supplied for free, and inspectors or customers can import the information into the test certificates.

As an inspector, Salas had a specific request when purchasing the load cell shackles: He needed to know exactly what he is picking up within .01% of the weight. “Typically in a crane, you have a safety factor built in,” he said. “I don’t need that in a load test, so I asked to have the curve removed.” Rayco-Wylie was able to accommodate that request, creating a perfect solution for his needs.

With dozens of employees and currently only three Rayco-Wylie w880 load cell shackles to use, Salas said the other inspectors on his team are asking when they are going to get more. He said eventually he will phase out the other dynamometers to make room for these less cumbersome load shackles.

“Everyone that does this for a living can appreciate the Rayco-Wylie load shackles,” he said. “It cuts down on steps. I can’t reiterate that enough. We’ve eliminated a lot of procurement problems we’ve run into.”