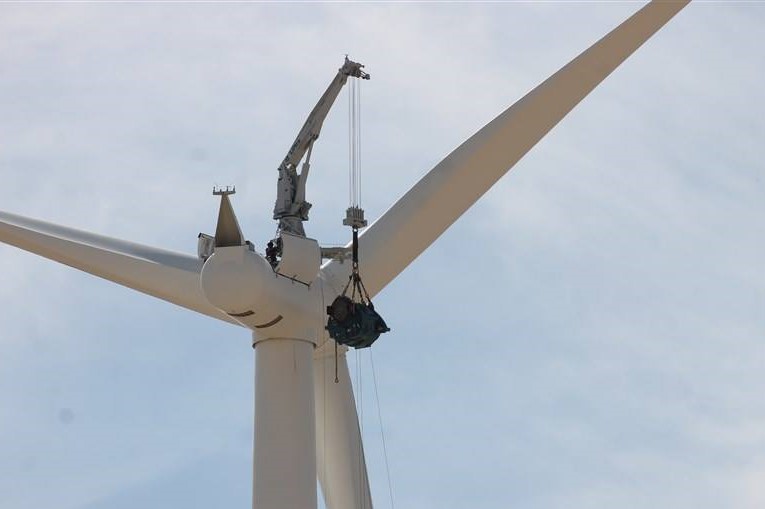 When a wind turbine needs a major component change, the Liftra LT1000 self-hoisting crane eliminates the need for a large mobile crane for the maintenance work. The unit, which has a 24-ton working load limit, can climb from its shipping container to the nacelle, suspended and guided by its own cables. Once it is on top of the turbine, the crane turns 180 degrees and mounts to the base inside the nacelle, where it is ready for operation. 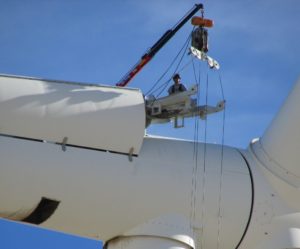 By comparison, Sims said the Liftra LT1000 will move for about $5 a mile. “We can move it coast to coast for a fraction of the cost to move a crawler crane only 200 miles,” he said. The self-hoisting crane ships on two legal load trailers: the crane comes in a 40-foot container, and the crane base is in a separate 12-foot container. “There are no oversize, overwide, or overweight loads, and there are no permit requirements,” he said.

During travel, the truck, carrier, and crane weigh about 70,000 pounds total, making it light enough to travel in areas with frost bans that restrict the axle weight to 10 tons per axle. “Most cranes carried on a trailer, or even an AT driven on the road, is 20,000 pounds per axle,” Sims said. “If a gearbox goes down in the middle of March in Minnesota, it may sit there for a month and a half until the frost bans are lifted and a conventional crane can get there. In this business, time is money. If the turbine isn’t spinning and making power, you are losing money.”

But the Liftra LT1000 is not for every wind turbine maintenance job. “In order for a gearbox exchange to be a candidate for the Liftra crane, the main bearings and drivetrain need to be in good shape,” Sims said. If the gearbox has failed, it will overheat and the case will crack on the gear box, draining out the oil and locking it up. “If it has seized, then we have to bring in a conventional crane,” he said. “Usually 25% of the gearboxes replaced in the United States are candidates for the self-hoisting crane.”

Jensen Crane Services is one of two companies in North America that commercially rents the Liftra LT1000 for wind turbine maintenance work. “Three or four years ago, Liftra would give you an operated lease for the crane, but two years ago, we worked out an agreement to purchase a crane, and they would train our operators to run the equipment,” he said. “It’s not like a NCCCO operator course – it takes about six months to be certified on these Liftra machines. There are only about 15 guys in the world who can operate them, and seven of those guys work for us.”

After purchasing its first unit two years ago, Sims said the volume of work has steadily increased, and it purchased a second LT1000 last year. “I’ve been in the business for 20 years, and the self-hoisting crane is one of the most brilliant pieces of engineering I’ve ever seen,” he said. “It’s complex, but simple at the same time. It is basically a boom truck crane mounted on top of the turbine, and it uses the driveshaft of the turbine as its mounting base to exchange the 35,000-pound gearbox.”

Liftra reported this fall it has received an order from a major turbine manufacturer to design and deliver an LT 1200 model. It is expected to be on the market in 2018, and it will be able to change components weighing up to 45 tons.