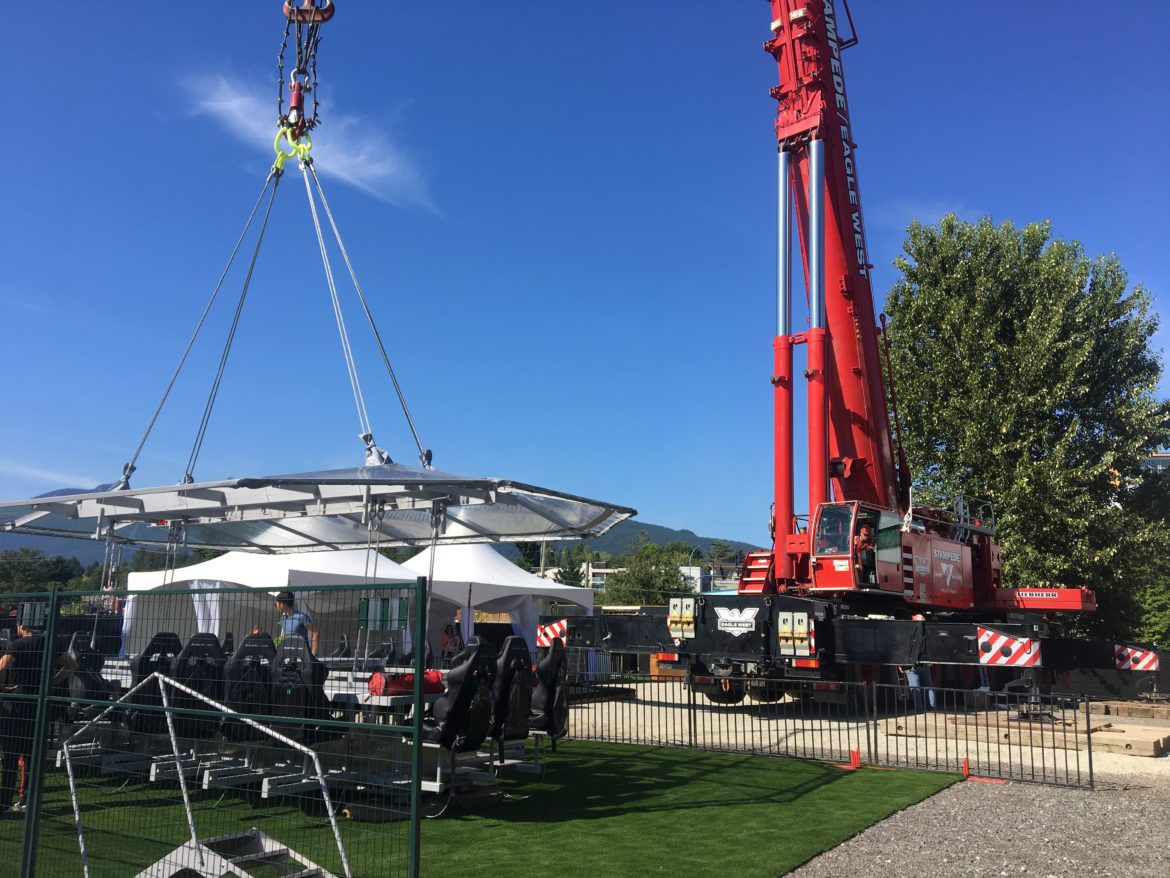 This month, thrill seekers and foodies in Vancouver, British Columbia, have come together to dine in the open air at heights of 150 feet. A specialty platform hoisted by a mobile crane makes this memorable dining experience possible. In the background, Eagle West Crane & Rigging and Arsenal Engineering worked for more than a year to come up with a plan to ensure each lift is safe.

Brad Paddock, safety supervisor for Eagle West Crane & Rigging, said the company made a verbal commitment in 2015 to participate in Canada’s first Dinner in the Sky event. Planning and logistics on the project began in the fall of 2016.

Ryan Stewart, owner of Arsenal Engineering and long-time engineering partner of Eagle West, said there were a number of different regulations that the crane needed to follow under WorkSafe BC, but the platform fell under a different regulatory body. “This particular device is unique,” he said. “It is somewhere between a mobile crane and an amusement park ride.” The British Columbia Safety Authority (BCSA) oversees amusement rides, and project planning also had to consider this separate set of codes and regulations.

Eagle West and Arsenal developed a lift plan based on guidelines from the Fun Group, originator of the Dinner in the Sky events, which included the crane size and configuration, the maximum height of the platform and its location, maximum lifting speeds, and maximum allowable wind speeds.

“Because they do this in Europe and other places around the world, they have spelled out a protocol of how it should be done,” Paddock. “They have an inspection procedure and maintenance procedure with checklists also in place.”

Pinning down a location for sky dining was one of the challenges, and Dinner in the Sky ultimately found its temporary home on Vancouver’s North Shore at the Mosquito Creek Marina. However, the land was once home to a sawmill, and environmental wells had been drilled around the site. “A ground-penetrating radar company came out and said there voids about six meters down,” he said. “We hired another company, Terran Geotechnical Consultants Ltd., which did core samples and other tests. They came up with a suitable ground-pressure rating that would work with our 96 square-foot mats.”

Another safety requirement was coming up with an evacuation plan, which included hiring Dynamic Rescue Services, a third-party, high-angle rescue team. “In the event that something happens where the crane couldn’t lower the platform, the rescue team has a harness that enables the people in the platform to reach the ground,” Stewart said.

The platform comes rigged with everything that suspends the load hook to the canopy, Paddock said. “Essentially it is a big spreader bar with an awning on it that keeps people dry or shaded,” he said. “The other rigging inside comes from the manufacturer. When Ryan and I looked inside, we could see that the size of the wire rope that was spec’d wasn’t sufficient to give us our 10:1, which is required by WorkSafe BC for elevated platforms. We had the rigging upsized and incorporated a 35-ton swivel below the load hook to accomplish a little more movement and rotation.”

The challenge was securing the secondary restraints. Paddock said the crane was running two parts of line. “If we put something like a shackle and piece of rigging onto the load line, the shackle would just be eaten up inside the load block when we hoisted or let it back down on the ground,” he added.

A lot of times, there is a large anchor lug that will be welded onto the load block to attach a shackle and create a secondary suspension rigging from there to the main rigging on the platform, Stewart said. “On this, we created some grommet slings that would run over the sheaves on the load block for the crane, and we didn’t have to do any welding or modifying of the load block,” he said.

On the three-part load block, only the center sheave was being used for the actual crane hoist rope. “We were able to use the two outside sheaves and connect our slings to the rigging from the work platform on either side of the hook, so it kept everything out of the way and a little cleaner looking,” Stewart added.

Dinner in the Sky Vancouver has been successful since its launch on July 1, Canada Day. Look for future event dates at SkyDine.ca.