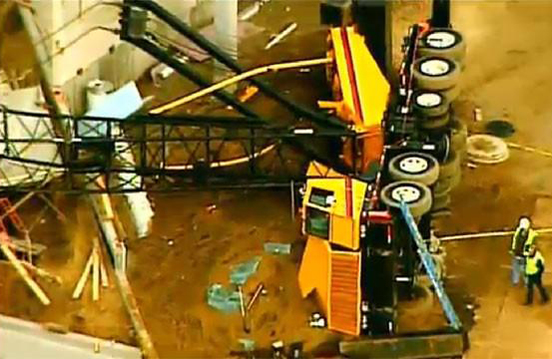 A 34-year-old construction worker is dead after the crane he was operating tipped over at a Maplewood, MN church Monday afternoon. 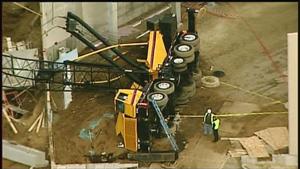 Cory Lewellin, of Ogilvie, Minn., was working at theÂ St. PaulÂ Hmong Alliance Church at 1770 McMenemy St. when the crane tipped on its side, said Maplewood Deputy Chief Dave Kvam. Authorities responded to the accident about noon.

Lewellin appeared to be moving a large beam when the outriggers to the sides of the crane gave way in the soil, Kvam said.

Before the police and fire crews arrived at the scene, other workers tried to dig Lewellin out of the cab, which had at least one broken window where dirt had fallen in. Emergency responders provided medical care to Lewellin as they worked to free him from the craneâ€™s cab using saws and other tools.

After he was extricated, Lewellin was transported to Regions Hospital in St. Paul where he died.

â€œIt is quite the tragedy,â€ Kvam said.

Kvam said that authorities are thankful that nobody else was injured by the multi-ton crane whose boom crushed a nearby fence and partly landed in an adjacent yard when it fell.

The crane is owned by Truck Crane Service ofÂ Eagan. Kvam didnâ€™t know the contractor who was leasing the crane. Workers appeared to be making an addition to the church when the accident took place.

A 36-year-old man is dead after a crane accident in Maplewood on Monday.

According to police, the accident occurred at the Hmong Alliance Church at 1770 McMenemy Street around noon.

Emergency responders provided medical care to the man, later identified as Cory Lewellin of Ogilvie, as they worked to free him from the cab. He was taken to Regions Hospital, where he was pronounced dead.

OSHA is investigating the cause of the incident. 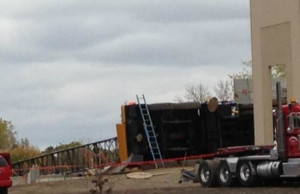 The crane that tipped over is an American 7150

Maplewood emergency personnel were called to the scene of a deadly construction accident at the St. Paul Hmong Alliance Church on Monday after a crane tipped onto its side.

The emergency call came just after noon from the construction site located at 1770 McMenemy Street.

Emergency responders were able to provide medical care to the victim, identified as 34-year-old Cory Lewellin, of Ogilvie, Minn., while they worked to free him from the cab.

Once Lewellin was extricated, he was taken to Regions Hospital; however, he was pronounced dead there despite the efforts of paramedics.

Maplewood police declined to speculate as to the cause of the accident, but said OSHA personnel have responded to the scene and are currently investigating.