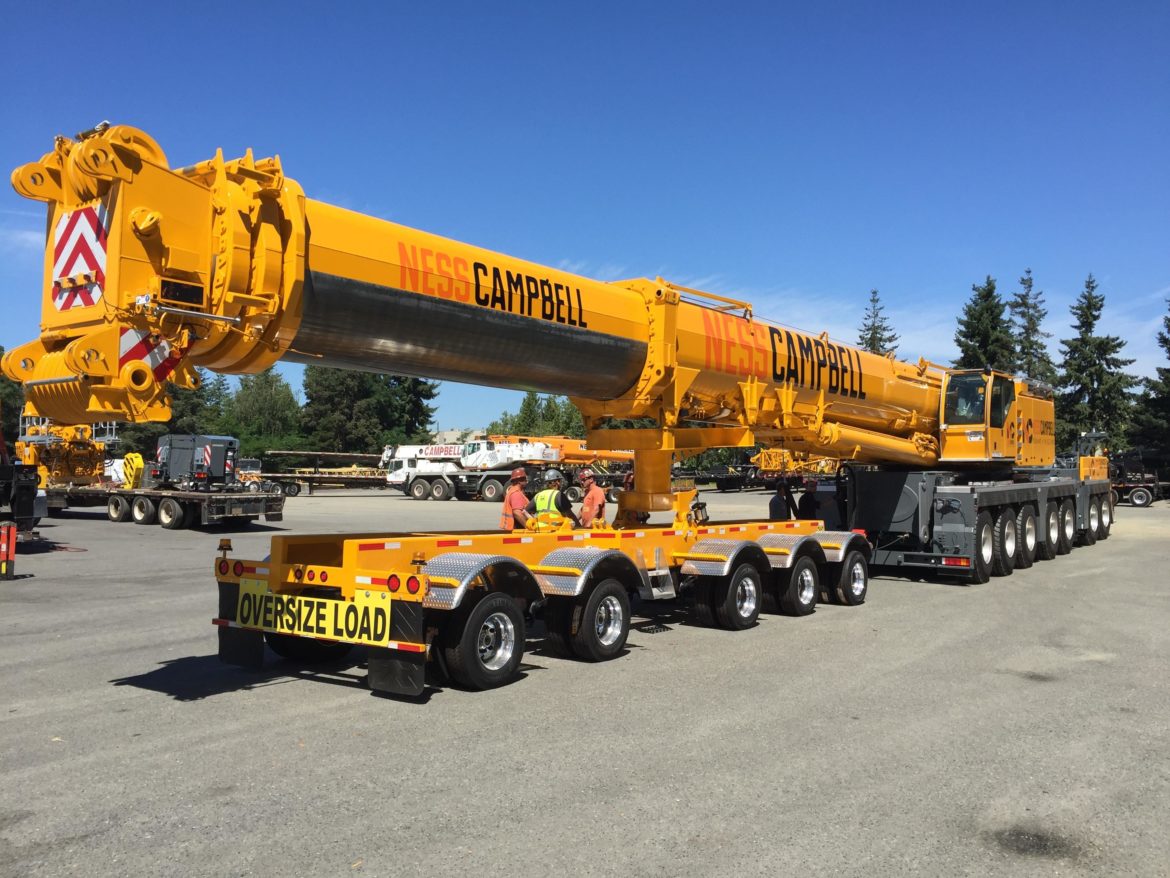 For crane rental companies in the Pacific Northwest, transporting a high-capacity crane through Washington and Oregon is challenging. Not only can the crane dimensions be too long to meet travel guidelines in the states, but the machine also has to be under a certain weight.

When NessCampbell Crane + Rigging was looking for a new 500-ton-capacity class all-terrain crane, it gravitated toward the Liebherr LTM 1400-7.1 all-terrain crane for its strong luffing jib load chart, “Y” Guy load charts, and the fast assemble and disassemble times, said John Anderson, president of NessCampbell. But the company also had a goal of keeping the crane’s gross weight under 200,000 pounds and 20,000 pounds per axle. Anderson said it also needed to be less than 100 feet long to “travel in both states with the boom and front outrigger beams in the crane without having to apply for a super load permit every time we moved.”

Randy Spike, Liebherr’s regional sales manager for the Pacific Northwest, said the crane manufacturer was able to remove some weight from the carrier by installing aluminum wheel rims. “[We also] had to look very hard at a boom dolly system that was capable of the weight distribution required to be under the state’s permit limits,” he said.

The benefit of using a boom dolly vs. a boom launch trailer, Anderson said, is “the boom dolly allows us to keep the boom in the crane during travel and not have to launch the boom into a trailer. This allows for faster assembly and disassembly times and eliminates one load in transporting our crane and components.” With the right boom dolly design, NessCampbell’s LTM 1400-7.1 could be legal for travel in both states without removing the boom and front outrigger beams.

To manufacture the custom-designed boom dolly, TransWorld Manufacturing was brought in to find a solution that was light and strong enough to move the unit easily and safely, Spike said.

To build a boom dolly that was lightweight but didn’t see a reduction in its strength or integrity, Dieleman said: “Our team met around a similar boom dolly and brainstormed about how and where we could possibly cut weight. We wrote down a long list of ideas that went back to engineering to see what was viable. Even if something only saved a few pounds here and there, we took that into consideration. Every pound counted on this build.”

“Since the crane was delivered [in mid-July], it has had more than 100% utilization, traveling and performing work all over the Pacific Northwest,” Anderson said. It has been used in a variety of applications, including tower crane erection and dismantle, tilt-up construction, HVAC work, industrial maintenance, transformer placement, steel erection, bridge erection, and general construction.

Video: Sarens Assembles One of the World’s Biggest Cranes