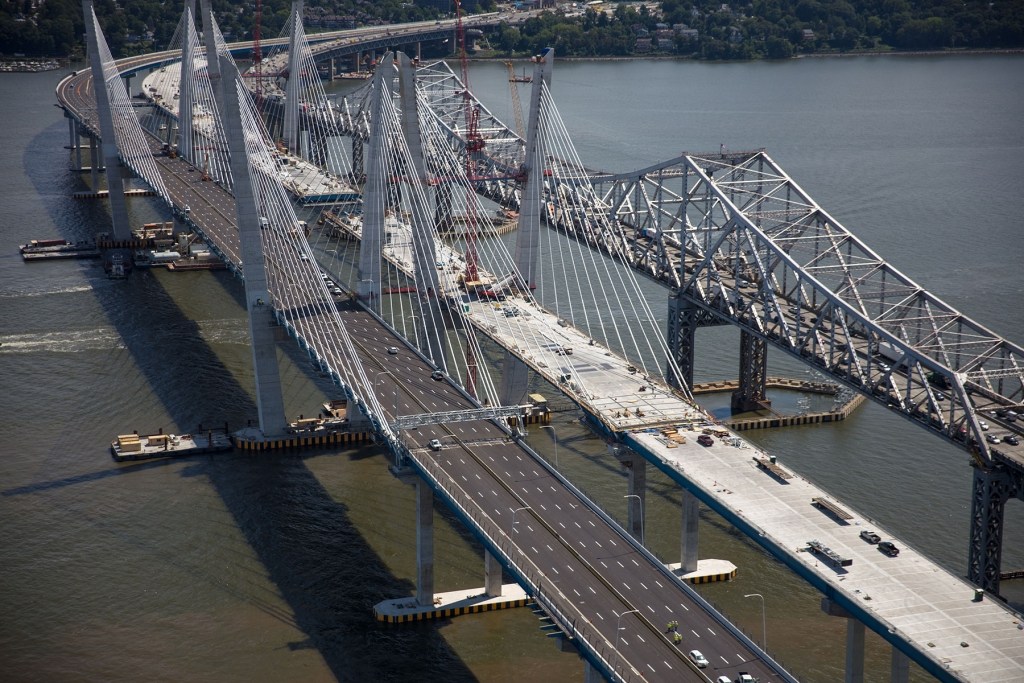 1955 was an iconic year for the United States: McDonald’s first opened its doors, Elvis Presley was aired over the first pocket transistor radios, and mouse ears became the rage with the debut of Disneyland and “The Mickey Mouse Club.”

The original 16,000-foot Tappan Zee Bridge across the Hudson River in New York also opened in 1955, allowing 18,000 commuter cars to travel each day between Westchester County and Rockland County. By the time Governor Andrew Cuomo declared the bridge functionally obsolete in 2011, more than 138,000 cars were crossing over the bridge each day.

Last month, Gov. Cuomo cut the ribbon on the first span of the new twin-span bridge, which is expected to serve the Hudson Valley for the next 100 years. The cable-stayed bridge, the first-ever built across the Hudson River, uses steel cables placed at an angle to connect the bridge deck to vertical towers that extend above the roadway. The bridge features eight 419-foot towers standing at a 5-degree angle, and has a total of 192 stay cables that would stretch 14 miles if laid end-to-end.

The new bridge – officially named the Governor Mario M. Cuomo Bridge – more than doubles the width of the original Tappan Zee Bridge, which was only 87 feet wide and had 7-foot lanes. Today, the bridge is 87 feet wide with four lanes on the southern span, from Rockland to Westchester, and it has a dedicated shoulder. The northern span is 96 feet wide with the same layout, plus the addition of a shared-use path for pedestrians and cyclists.

Discussions to replace the bridge began back in 1999. More than 430 meetings were held, 150 concepts were considered, and $88 million was spent on the project, but it did not move forward until new design-build legislation was enacted in 2011. Tappan Zee Constructors, a consortium of design-builders that includes Fluor, American Bridge, Traylor Bros., and Granite Construction, synchronized the design and construction of the new Tappan Zee Bridge. A plan was selected in fall 2012, and by fall 2013, the first foundational steel piles were driven into the Hudson River, marking the beginning of one of the nation’s largest infrastructure projects. 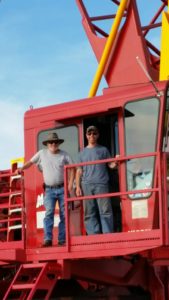 Aaron Bauer, a crane operator with Local Union 98 in western Massachusetts, worked on the project for two years during the height of the crane work. While on a job in New Jersey in 2013, he was encouraged by his training director, Doug Fay, to get his New York State operator certification for the chance to be a part of this massive project. After working on jobs in New Jersey and New York for Local 825, he was then dispatched to operate cranes on the Tappan Zee Bridge in August 2014. “I was thrilled to be there,” he said. “When I started working on the bridge, I knew it would be a career changer. People around the world saw how big this project was.”

For six months, Bauer worked nights, running one of Traylor Bros.’ Manitowoc 4100 Ringers mounted a barge called the Hoosier. The crane was one of four barge-mounted Manitowoc crawler cranes with Ringer attachments on the job. “I was tripping cans and driving pile 160 to 180 feet long with a vibratory hammer. When the temperatures got below freezing, the project was shut down for 10 weeks,” he said.

In fall 2014, the first approach-span pile caps were installed. These 300-ton concrete caps are the size of a tennis court, and they are designed to cover the piles and serve as foundation platforms for the bridge’s piers. Prefabricated at an offsite facility, the caps were transported using a multi-wheel gantry crane to the barges, where they were inspected and then floated to the project site. Once on site, barge-mounted cranes equipped with specially engineered rigging gripped the caps, which looked like a bath tub, and positioned each one atop a grouping of piles.

Also during the same time, one of the world’s largest floating cranes, the Left Coast Lifter, arrived on the job to handle loads like the precast caps. The crane led the pack of more than 35 barge-mounted cranes on the Tappan Zee Bridge. It has a 328-foot-long boom and a 1,900-ton lifting capacity. The barge it sits on is 356 feet long.

The Left Coast Lifter initially worked on the San Francisco-Oakland Bay Bridge from 2010 to 2011, placing pre-fabricated falsework truss sections and 28 box girder deck sections. It was later purchased by Tappan Zee Constructors for the Tappan Zee Bridge replacement project. In New York, the crane was nicknamed the I Lift NY Super Crane. Its first lift on the Tappan Zee was in April 2015.

By summer 2015, the pile driving was completed. “After that, we were stripping forms, installing forms, and pumping piles,” he said. “All the piles that we drove into the mud, the water had to be pumped out.” The precast concrete caps were still being set on top of the piles by I Lift NY and a Manitowoc 4600 Ringer crane on a barge called the Hank Hummel.

“After it was set, we not only had to clean out the tub of water, but we had to get the tub ready for the next trades who were fitting the rebar and pouring concrete,” Bauer said. The rebar was enclosed with up to 750 cubic yards of concrete poured from one of the project’s three floating batch plants to seal the caps to the exterior of the piles and secure the bridge supports. 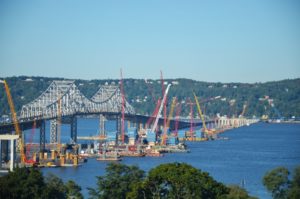 More than 40 cranes were on the water at the new Tappan Zee Bridge.

“We would put forms on, another crew would come in, lower the tub to grade, and pour concrete into the tub,” he said. “Our crew would come back, and we’d strip the forms and move on to the next pier. There was a lot of jumping around.”

With 42 piers on the bridge, Bauer and the night crew worked on about one pier per night. During that time, Bauer said he operated 38 crawler cranes on Tappan Zee. “No other place would you have that many cranes in the same spot on the same job,” he said. “At one point, we had over 40 cranes on the water. I would run three to five cranes a night, if I had to. There was a crane at almost every pier.”

That summer, he also helped dismantle the trestles on the Rockland County side of the bridge because bridge beams were being set by crane operators on the day shift. To reduce the amount of dredging required on the project site, trestles were used on both sides of the Hudson River. The trestles extended 1,000 feet and ran parallel to the existing bridge, which enabled cranes and other heavy equipment to work over the shallow water.

Fall 2015 marked the first night-time girder launch. Using a jack-and-slide system, the massive steel-blue girder assembly was moved over the Metro-North Railroad Hudson Line on the Westchester County side toward the first pier in the Hudson River. Train schedules were adjusted to allow the work to be completed overnight. In November and December, additional girders were connected. 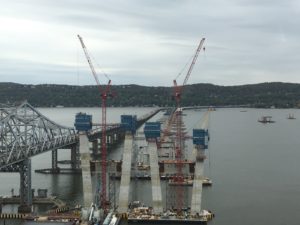 Bauer operated a Potain 608 luffing crane for more than six months on the project.

After the majority of the piers were poured, the road deck panels were finally being installed. Bauer began operating a Potain 608 luffing crane on Pier 32 in December 2015, which is where he stayed until the night shift was shut down in July 2016. “In that crane, I was flying concrete, installing jumping forms, and stripping jumping forms for the carpenters,” he said.

Although Bauer’s time on the project ended, the bridge wasn’t completed for another year. From July 2016 until the bridge was opened in August 2017, several milestones were made.

This week, the final section of steel on the eastbound span of the Governor Mario M. Cuomo Bridge was installed, creating a continuous nearly 3-mile-long connection from the edge of the Westchester approach to the end of the Rockland approach. Next month, southbound/eastbound traffic will be shifted from the old Tappan Zee Bridge onto the westbound span of the new bridge, allowing for the landings of the old bridge to be demolished. The second span is scheduled to open to eastbound traffic in 2018.

For an operator running different makes and models of cranes on a massive project like the Tappan Zee Bridge, Bauer said this presents a number of challenges. “I hadn’t even seen all of these types of machines in my career up this point,” he said. “Every crane is different – the speed, the way they react – you had to become familiarized until you are comfortable with it.”

Working on the water with the tide changing, dealing with crane list on the water, and weather made night operation difficult. “We had some good storms out on the river with 4- to 6-foot seas, including a tropical depression,” he said. “We spent one night moving the barges off the outskirts of the river onto the north and south sides of the bridge.”

Noting the best thing about being on the bridge was the magnitude of the project and knowing his career was going to change because of the work he did on Tappan Zee, Bauer said the experience was an honor. “I was working with guys who were 30 years older than me who were literally walking out the door for retirement after this job was completed,” he said. “They were 40-year-veterans, and I was their crane partner. I learned something from every single crane partner I had.”

Meet the Crane Network Team at the...