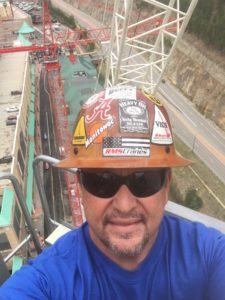 Timothy Phillips has been interested in construction since he was a teenager, and during high school, he worked for his father’s plumbing business each summer break. After high school, he enlisted in the U.S. Marine Corp, and then worked for a newspaper while in college in Hawaii, where he first read about tower crane operation as a career. Although he didn’t pursue heavy equipment operation until he was 35 years old, Phillip’s fascination with cranes stayed with him through the years, as he dabbled in heavy commercial construction along the Gulf Coast and worked alongside his wife as a commercial trucking team. In this Five Minute interview, Phillips shares his experiences as a tower crane operator.

How did you get started as a tower crane operator?

I was burned out on driving coast to coast and was ready to settle in at home. I remembered that newspaper article and told my wife that I wanted to look into running cranes when we were back in Colorado.

Another year later, I was on a job assembling a tower crane, and the tower crane operator had been fired that day. The boss asked if I could run the tower crane, and I felt confident that I could. I had been in the cab a few times and also had maintained them. The controls are fairly similar to a hydraulic crane, so I said I would do it.

The next day, I climbed up, and the technician walked me through putting the crane together. Everything went smoothly. After that, I kept in touch with my mentor, who continued to help me learn about tower crane operation.

When did you become a tower crane operator?

I got in the seat in 2007 and was certified shortly thereafter. There is no state certification requirement in Colorado, but the contractors expect it — and in some cases, they demand it. The company I was working for required everyone to be certified, so I tested for the tower crane certification. Two or three years later, I received the hydraulic crane certification, and in between tower crane jobs, I will operate a hydraulic crane. When the economy was slow, I would operate mobile cranes on refinery jobs. I’ve also worked in shipyards and have operated portal cranes, gantries, and overhead shop cranes.

Why did you choose running tower cranes over telescopic or crawler cranes?

How does a tower crane differ in operation from mobile cranes?

You have a different perspective on things. For the most part, we use two-way radios, and with that comes the challenge of trying to understand people. On the ground, we use hand signals because the signalperson is working within 100 feet of the crane. When I’m on the ground, I can visit the crew and get to know them. In the tower crane, it is less personal.

Weather is a bigger concern. The higher up you are, the more you are exposed you are to wind. The winter can be tough in Colorado, and your ladder can be encrusted with snow and ice, which is a challenge.

You also have to get there early to climb, taking your food and water up for the day. You have to plan ahead, as you can’t go to the convenience store in the middle of the day.

What are some of the biggest challenges as a tower crane operator?

One of the biggest challenges is having qualified signal persons and riggers. You’ll get some good guys, but others seem to have rushed through a class, or there is a language barrier. You have certified people, but they may not be well qualified. I’d like to see the adoption of a practice where the primary rigger/signal person is an oiler to the operator and is apprenticing to become an operator.

How would you recommend someone get started in crane operation as a profession?

I’m a big advocate of the International Union of Operating Engineers’ apprenticeship program. I wish I had gone through it. They have some really cool classes, and you get a broader understanding of the mechanics of the equipment.