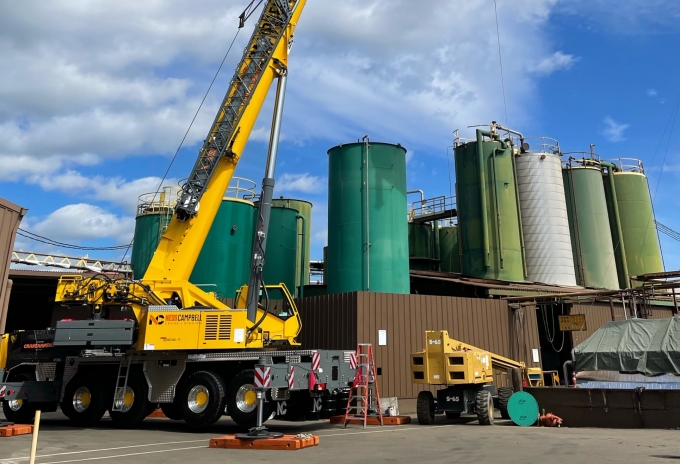 Portland, Oregon-based NessCampbell Crane + Rigging, a longtime Manitowoc customer, put its new Grove GMK5250XL-1 all-terrain crane to work immediately after it was delivered in late September. The crane was the first of its kind to arrive in the Northwest, and it already has successfully completed a handful of jobs.

The crane’s first job involved lifting and placing 26,000 lbs metal structures at a power plant just outside Sheridan, Oregon. For this project job, the GMK5250XL-1 was fitted with 57,000 lbs of counterweight and 131 ft of boom at a 60 ft radius.

“The crane performed perfectly,” said John Anderson, NessCampbell president. “Our operators took their time to execute a safe and efficient lifting plan. The job was completed within the expected timeframe and our customer was satisfied with the operation.”

Following the power plant work, the crane moved on to hoist four new 3,600-lbs HVAC units at an industrial facility on the outskirts of Portland. The crane was rigged with 110,000 lbs of counterweights, and setup with a 229 ft-long boom at a 190 ft radius.

“This was a one-day job that took six hours total, including travel time and setup, executed safely and efficiently,” Anderson said. “Our operator and oiler are quickly adjusting to the new machine, and said they find the advance technology and capabilities of the crane a great benefit to our customers. They also mentioned the crane’s small footprint and ability to maneuver at the jobsite as great plusses.”

The Grove GMK5250XL-1 all-terrain crane has the longest boom in its class, which combined with a maximum capacity of 300 USt, small footprint and excellent maneuverability, adds to NessCampbell’s already extensive fleet of all-terrain cranes.

“We looked at the specs for the GMK5250XL-1 and were impressed with its capacity and the enhancements in the load charts, as well as its compact design,” Anderson explained. “We’ve had such good experience with our Grove cranes, especially our GMK cranes, that we knew the GMK5250XL-1 would be a great fit for our rental fleet.”

“We’re confident the Grove GMK5250XL-1 will be an excellent addition to NessCampbell’s fleet,” said Matt Noonan, sales specialist at Western Pacific. “The combination of high capacity and best-in-class boom length makes this crane a perfect fit for jobs in a variety of industries.”

NessCampbell serves the Northwest from its headquarters in Portland, Oregon, and from its Bothell, Washington, location. The company specialties include lifting, hauling, rigging and engineering. It prides itself in having experienced staff and NCCCO-certified crane operators. NessCampbell’s fleet includes Grove rough-terrain and all-terrain cranes, Manitowoc crawler cranes and National Crane boom trucks.