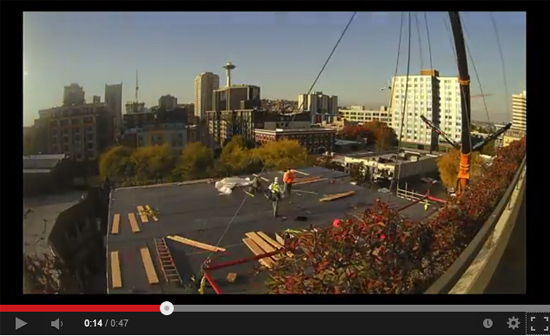 It sure made for dramatic TV this weekend in Seattle: a giant crane dropping 14 x 30 foot, fully assembled studio apartments into place, stacking them like Lego blocks. Inside each one, kitchen, bath, and a modular living space outfitted with a unique invention: a two-sided “Abodian Wall” that converts from desk to dining table on one side, closets with a folding bed on the other.

Each studio unit is roughly 420 square feet in size and includes a balcony. The complex of 49 units is built on a standard 60-foot-wide urban parcel between the Grandview condominium and Dan’s Grocery on Third Avenue. It will also house 3,000 square feet of ground-level retail, a rooftop deck, an outdoor community space, and a bicycle storage facility.

The modules were put together by Seattle-based OneBuild at its factory in Klamath Falls, Ore. General contractor for the operation is Charter Construction, which is also managing several projects around town, including a traditional apartment complex atop Queen Anne.

“The difference here is that modular construction allows us to complete the disruptive part of on-site work in only two weekends, compared to several months on a traditional project,” said a spokesman for Daly Partners.

It should be noted that these are not undersized “apodments” that are meeting opposition in other neighborhoods; the N-Habit units are similar in size to other Belltown studios and one-bedroom lofts. Rental rates will also be similar: from $1,125 for the studios to $1,975 for a two-level loft with a view on the top floor.

The original schedule to stack the modules was postponed because of the heavy rains at the beginning of the month. Now, with the first half of the project completed, we can expect the final units to be airlifted into place this coming weekend. Look for N-Habit to welcome its first tenants in early 2014. 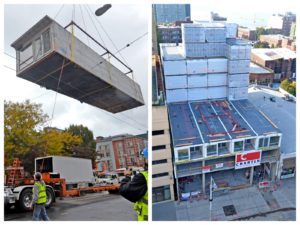