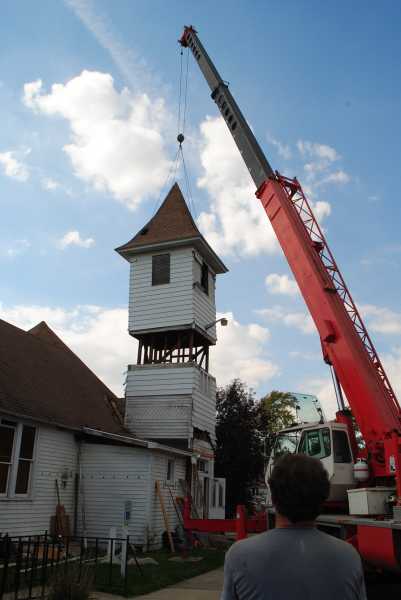 You might think a historic event that occurs only once in 120 years would draw a crowd of more than a dozen or so people.

Plus, Martinton has a population of just 377, and the event was on Friday morning â€” prime payday work hours.

It isnâ€™t widely known that this octagon-shaped church building, erected here in 1895, had originally been a model chapel in 1893 at the Worldâ€™s Columbian Exposition, as the Chicago World’s Fair was known.

According to church history, after the exposition ended, a group of church elders went to Chicago and bought the model church.

Now, itâ€™s being partially dismantled and will be moved to a wooded site near Morocco, Ind., by Tim Storey, of Kentland, Ind., a historic preservationist with plans to make it the centerpiece of a retreat.

Storey worked for about four hours Friday morning with milllwright Jim Harwood, of Jim Cook’s A-1 Crane Co., in Milford, to get the top half of the tall steeple severed from the bottom and secured to the crane cables.

Then, when the last support was cut, it took crane operator T.J. Crawford, of Milford, about 90 seconds to lift it up and gently move and lower it onto a flatbed trailer left by MCE House and Building Movers of Paxton. Lattimer went into the church and rang the huge historic World’s Fair bell about 10 tolls to celebrate the occasion.

The moving company also has placed huge steel beams inside the main structure, 30 feet wide and nearly 100 feet high, in order to safely move it to a farm field south of town. It will sit there until spring, then it will be moved about a dozen or more miles to Indiana.