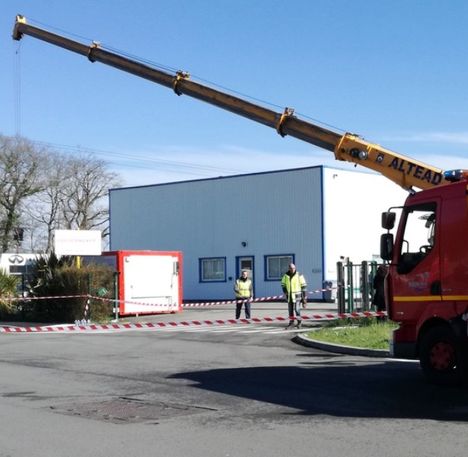 Three men were severely injured this morning near Nantes, France, when the crane they were working with came into contact with high voltage overhead power lines.

The All Terrain crane was lifting pre-fabricated building elements into place at a site on an industrial estate in Bouguenais, near Nantes Airport when the hoist line touched the power lines causing the electricity to rush to earth badly burning two of the men working with the crane on the ground, while a third man who was working close by was also injured.

The crane operator knew enough to stay put and was able to exit the crane cab around an hour after the incident occurred – he was totally unharmed. One of the two men is said to be in a critical condition, while the second’s condition was described as serious. The third man is no longer in intensive care.

Telehandler on the roof

Potain to showcase its Hup and Igo...