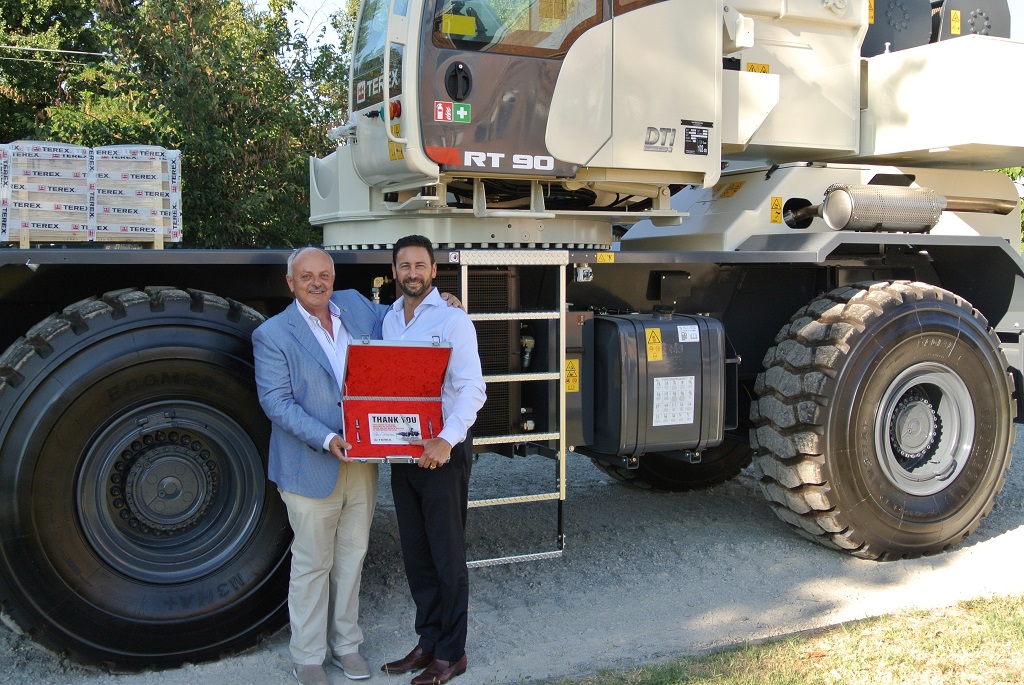 With an 86-tonne load capacity, a five-section hydraulic boom that stretches 47 meters, and multi-stage outriggers, the Terex RT 90 crane can be quickly adapted to jobsite condition. It features a redesigned cab with an 18-degree tilt and an easy access flat deck for improved visibility. The Terex RT 90 features the Demag IC-1 control system, which can be monitored on a color touch screen for intuitive use. Its advanced diagnostics allow easy service.

“We pride ourselves on providing our customers with the best quality equipment at competitive prices,” says Andrea Pavoni, sales manager at Tecno-Gru. “The RT 90 rough terrain crane certainly delivers on those two points. Also, the crane’s narrow profile will make it easier to transport the crane on Italy’s roadways — something I know our local customers will appreciate. We’re confident that there will be a significant demand for this machine when contractors see what it can do.”

Showing his appreciation for the partnership between Tecno-Gru and Terex Cranes over the last several decades, Steve Filipov presented the TECNO-GRU team with the keys to its new Terex RT 90 crane. “Tecno-Gru is doing an excellent job of representing the Terex and Demag brands and products. Focused on the needs of the customers, Tecno-Gru proactively adds inventory to its sales and rental fleet so it’s there when their customers need it. They also do a wonderful job of training contractors and providing service after the sale. I’m happy to call them a partner” he says.