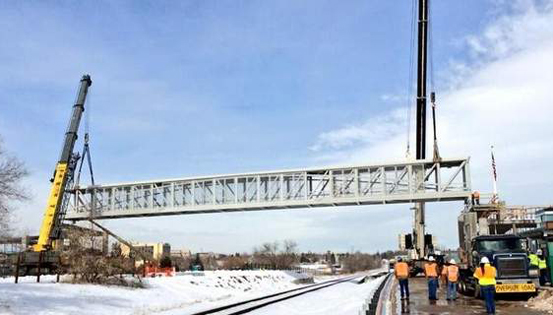 Contractors on Wednesday lifted into place the 92.5-ton MAX pedestrian bridge across the railroad tracks behind Whole Foods in Fort Collins.

The bridge, which will open to public use in May, links the federal campus to the west with the shopping center to the east, serving the Mason Corridor’s bus rapid-transit stop situated between the two.

“It’s been a long haul, and this is going to be an important link west to east,” said Rick Richter, the city’s director of infrastructure services. “It’s one more piece of the puzzle.”

Contractors took most of the day to set up the two cranes needed to lift the bridge and shimmy it onto newly constructed piers.

The piers support both the bridge and a pedestrian ramp allowing walkers and cyclists to cross the tracks legally for the first time. The actual placement took about an hour, and was completed shortly before 2 p.m.

BNSF Railway temporarily halted trains through the city while the lift was ongoing.

Two prior attempts to lift the bridge, which was built in pieces in Greeley and assembled on site, were canceled due to snow.

MAX is an $87 million transit project linking Old Town Fort Collins with a new transit center south of Harmony Road. The 5-mile-long project aims to whisk riders north and south, helping spur denser development along the city’s spine. Service is set to begin in May. 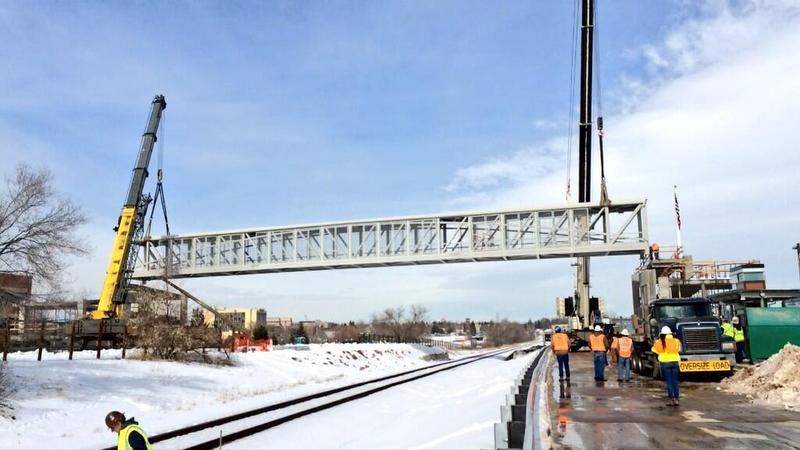 Two cranes lift the pedestrian bridge over the BNSF Railway tracks near Whole Foods Market into place on Wednesday in Midtown Fort Collins. The bridge is part of improvements brought on by MAX, the city’s $87 million bus rapid-transit system set to open to passengers in May.