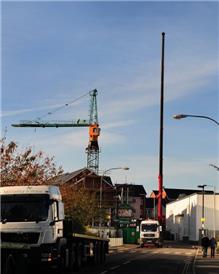 A WORKER was seriously injured on an Isle of Wight building site this week.

The Health and Safety Executive (HSE) is making enquiries after a report that part of a huge crane fell on him at a McCarthy and Stone site, near Sainsburyâ€™s, Newport, on Tuesday.

The man is understood to have suffered serious leg or foot injuries, as the crane was being dismantled, and was taken to St Maryâ€™s Hospital, Newport, where it is believed he underwent an operation to save his limb.

A McCarthy and Stone spokesman confirmed yesterday (Wednesday) the man remained in hospital and was said to be ‘doing wellâ€™.

The spokesman said: “We are investigating an incident at our Newport development which resulted in an injury to one of our employees.

“The safety of our people is paramount and the company has a robust approach to health and safety matters.”

A Health and Safety Executive (HSE) investigation has been launched after a worker was injured at the McCarthy and Stone site in Newport, Isle of Wight.Picture by Jennifer Burton.