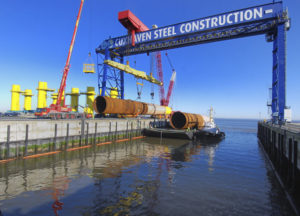 Schmidbauer using a Modulift beam as an inverted spreader because it had two pick points above it and the slings had to be brought together in one point. Photo: Cuxport GmbH

Crane and transport specialist Schmidbauer overcame a range of challenges on a project to handle components for an offshore wind farm.

The Modulift spreader combined with a 45 metre beam was attached to the gantry and to the crawler to lift the 750 tonne monopiles from pontoons onto land in Cuxhaven on Germany’s North Sea coast. The monopiles were for the Nordsee One offshore wind farm.

A complication to be considered was the special coating on the monopiles that meant attaching rigging equipment was not possible at all points. Additional challenges included limited height availability and the 20 m distance between the gantry’s hooks that were 10 m each side of the centre.

Two lifting lugs in the centre of the 45 m beam offered a convenient distance of 4.75 m but they were pointing the wrong way. Philipp Verges, Schmidbauer sales manager global projects and key account manager offshore, said that they were pointing 90 degrees in the wrong direction because the beam was manufactured to lift foundations with three legs.

Verges said, “Slings came together in a 600 tonne hook block that allowed us to complete turning of the monopiles. The rigging around the monopiles had to be kept short so we had to deliver [125 tonne] Polytex slings at a special length to fulfil the requirements.”

Thirty monopiles were lifted over five months. A smaller crane would have insufficient capacity at the radius necessary to reach the second row. This would have meant having to turn the barge around.

The Nordsee One wind farm is 54 turbines and an offshore substation platform.

Tulsa Port of Catoosa achieves best of both worlds