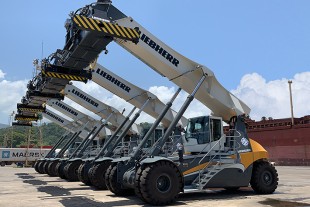 Liebherr Reachstacker celebrate decisive success on the Central and South American market. A large number of the most important ports will in future be equipped with next-generation reachstackers from Liebherr. A low diesel consumption and a good customer service network were the decisive arguments that helped Liebherr to win the tenders.

The vast majority of reachstackers offered by most manufacturers on the market operate with an outdated mechanical drive system. This type of mechanical power transmission has not been further developed for many years and is therefore no longer up to date. Liebherr relies on a hydrostatic drive for many machines, such as the Liebherr wheel loaders, which have already been sold more than 50,000 times. The Liebherr Reachstacker LRS 545 is also equipped with a hydrostatic drive. This type of drive requires neither a torque converter nor a differential. In addition, there are fewer power losses due to the non-existent mechanical power transmission. This means that the energy produced by the diesel engine is transmitted to the wheels with much fewer wastages. The result is significantly lower fuel consumption while maintaining the same performance.

First units in operation in Guatemala

EMPORNAC Guatemala has awarded Liebherr a contract to supply and service 20 Toplift Reachstackers as the winner of an international tender. EMPORNAC took into account that the dedicated fuel consumption and driving comfort of the Liebherr hydrostatic reachstacker is unique under the given conditions. Due to the excellent delivery time and quality commitment, they decided that Liebherr offers the most advanced and cost-effective reachstacker on the market. The first units for EMPORNAC were handed over and commissioned in August 2019.

Since introduction of the Liebherr LRS 545 in the year 2016, this so-called hydrostatic drive concept has been convincing more and more Terminal Operators. The LRS 545 is mainly and first of all by its ability to safe up to 30-40% fuel – even without applying any hybrid technologies.

SAAM, one of the most important Latin American Terminal Operator has awarded the international tender of 28 units of Reachstackers for their Terminals in Chile, Ecuador and USA for the years 2019/20, to Liebherr-MCCtec Rostock.

Liebherr relies on a worldwide operating service network and many years of experience in dealing with hydrostatic drive systems. Thanks to the service centres, which operate across all divisions when required, Liebherr is also able to react quickly to customer reports and guarantee smooth service. Liebherr also attaches particular importance to the continuous expansion of its service network. This often leads to new service contracts or the enlargement of existing service stations. For example, a state-of-the-art large warehouse was recently opened in Chile, which makes it possible to significantly increase service and spare part availability.