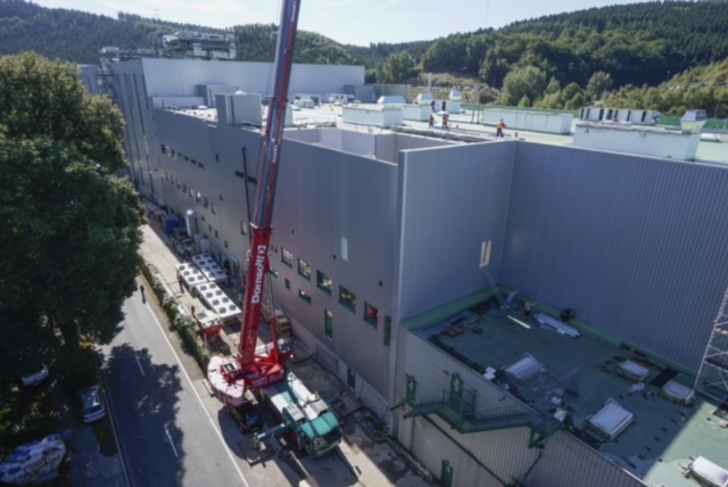 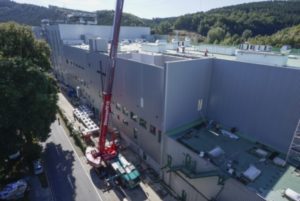 A Grove GMK5250L mobile crane, configured with its hydraulic luffing boom extension, has completed an HVAC project for German crane rental company Dornseiff. On its first job for the Burbach-based company, the crane lifted 10 refrigeration units at an unusually long radius.

The jobsite was in the Oberbergisch region in North Rhine-Westphalia, Germany, and included lifting refrigeration units for a tall building. The units weighed 2.4 tonnes, and Dornseiff needed to lift them onto a roof 22.5 metres in height – parameters that may not seem extraordinary for a tower crane, but considering the lifts had to be performed at a radius of 57 m, a mobile crane solution was called for.

Michel Jaeger, field technician at Dornseiff, said: “In the past, we always chose tower cranes over mobile when working within a confined operational space. However, tower cranes were unable to offer the required lifting capacity for this project.

“Our new Grove GMK5250L, with an added luffing jib extension, was able to complete the lifts and eliminate the logistical expenses of using more than one crane.”

The GMK5250L’s 70 m main boom, plus a 29.3 m luffing jib extension enabled Dornseiff to make the lifts from the 57 m radius with ease. Its bi-fold swing-away, which can reach a maximum length of 37 m and up to 50 degree offset, was also crucial to the project’s success. And because the 250 tonne capacity GMK5250L has the longest reach and strongest load chart of any five-axle mobile crane, it was able to fit onto the job site into a space that most larger, six-axle cranes would not have been able to manoeuvre.

In addition, by using a mobile crane where the company might have used a tower crane in the past, Dornseiff was able to save time and money on job site preparation, as it only needed one crane for the job instead of two (the second being a mobile crane to erect the tower crane).

“Due to the fact that our new crane would mainly operate on hilly terrain in the Olpe region, we needed a model that offered the best manoeuvrability and class-leading driver comfort, which the GMK5250L delivers thanks to the VIAB turbo clutch and Megatrak suspension,” he said.