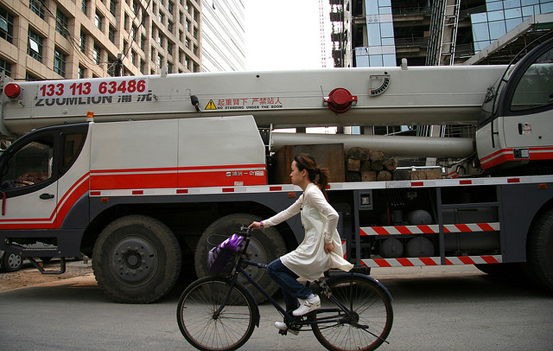 With its fiercest competitor Zoomlion under media fire because ofÂ a Chinese reporterâ€™s arrest,Â Sany Heavy IndustryÂ â€“ Chinaâ€™s biggest manufacturer of construction machinery, may not be smiling. As investors speculate about the financial health of Changsha-based Zoomlion and the strength of its political ties, Sany also saw its stock drop this weekâ€”5% on the Shanghai Stock Exchange and 4% in Hong Kong (well, that was Â better than Zoomlionâ€™s 7.5%). The wealth of Sany ChairmanÂ Liang Wengen, who ranked No.14 on ourÂ China Rich ListÂ just a week ago with $5 billion, is now down to $4.7 billion. Two other Sany executives on our list,Â Xiang WenboÂ andÂ Tang Xiuguo, each lost more than $30 million.

The storm hit on Tuesday when police detained Chen Yongzhouâ€“a reporter at NewÂ ExpressÂ EXPRÂ -1.27%Â who questioned the sales, marketing strategies and stock activities of Zoomlion in a series of 14 articlesâ€“on charges of fabricating facts and â€œdamaging a commercial reputation.â€ The arrest was made in a strikingly similar fashion to â€œshuanggui,â€ or the practice of putting government officials under supervision. The police asked to meet with Chen, purportedly to discuss his burglarized apartment, then took him away in a Mercedes-Benz, which was later rumored to have belonged to Zoomlion, the Southern Metropolis Daily reported.

This incident puts the spotlight back on the bitter rivalry between Sany, 37% owned by Liang, and Zoomlion, No.2 in the industry and 27% owned by the Chinese government. Gao Hui, assistant to Zoomlionâ€™s chairman, accused Chen of being a â€œblack hand,â€ writing in exchange for benefits. In emotionally charged language, he wrote on his Weibo feed in mid-July: â€œ[Chen] has never interviewed Zoomlion, but has interviewed Sany executive Xiang Wenbo multiple timesâ€¦how did his reporter identity come to be arrested by a third party?â€ In another post that soon followed, Gao questioned â€œwhether Chen worked for New Express, or for Sany Heavy Industry.â€

The bulk of Chenâ€™s articles appeared after a Sany employee was arrested for stealing Zoomlion business secrets last November. In the same month, Sany relocated its headquarters from Changsha to Beijing, citing Liangâ€™s exhaustion from the stream of negative publicity and â€œuntrue reports.â€ Later, in a 9,000-word feature, Global Enterprises magazine detailed cases of cut-throat competition between the two companies, the chairmenâ€™s unpleasant interactions, and harm done to Liangâ€™s family. Zoomlion responded by throwing nearly identical daggers at Sany.

Neither party gained much from being at swords points. Both would have been better off channeling their energy into improving sales. Overproduction in 2012 andÂ overly aggressive expansion abroad slowed Zoomlionâ€™s growthÂ from 45% in 2011 to 4%, while Sany experienced a 7% decline in sales. They were again hit severely in the first half of 2013, as the drop in infrastructure projects in China hurt the whole industry. Regardless of whoâ€™s the real victim, Zoomlion and Sany both face the same problem: revenue at both is projected to drop some 10% this year.