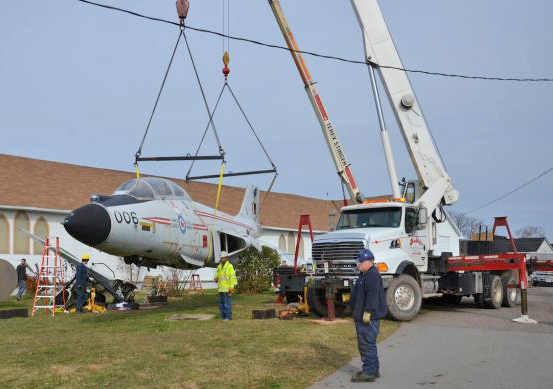 Thursday morning Keddyâ€™s showed up with a 30-ton and 10-ton crane and they started to work wiggling off the wings.

One crane lifted on a wing, the other lifted the rear of the Voodooâ€™s fuselage and inside and underneath crews banged at inner bolts that held the wings in place.

â€œSome of that came very easily and some of them we had to find just the right spot, the right angle of the wing and fuselage to knock out the bolts,â€ said spokesperson David Kreutzkamp.

The crew needed two hours to get off the first wing â€“ with lessons learned the second wing came off in an hour.

Then both cranes lifted the plane, a special extendable trailer backed up under the Voodoo and eventually drove away to the ferry terminal and off to Ontario. 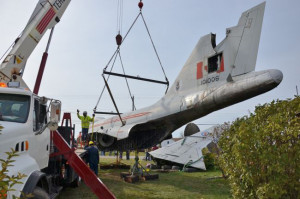 The crew decided not to take the T-33 trainer jet from its pedestal near Hwy 1 in Cornwallis because they said it was too far gone.

â€œWe opened it up and it was full of birdâ€™s nest and very badly corroded,â€ said Kreutzkamp. â€œGetting all the screws out to open the panels to get at the wings â€“ they are corroded so badly, we just donâ€™t have the time to get it apart.â€

They did consider lowering the T-33 and taking the jump seat and other salvageable parts but ran out of time with the cranes.

Gordon Magee, president of the Cornwallis Military Museum says they will have to find someone and some way to scrap the T-33.

The Cornwallis museum had offered both planes to JAM because they were unable to look after the planes anymore.