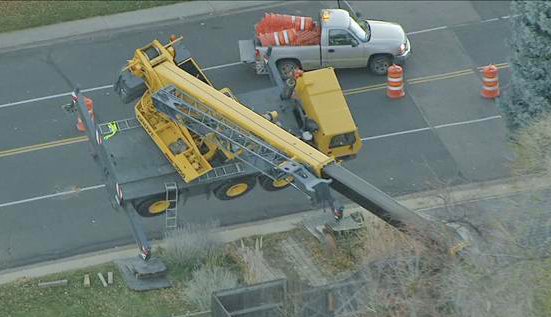 FORT COLLINS – A tree pulled a large crane off its wheels in a Fort Collins neighborhood Wednesday afternoon after a limb that was trimmed proved heavier than expected.

The crane is a 3 axle Grove GMK3050 All Terrain

The 80,000-pound crane, apparently stable on two metal jacks, was expected to remain tilted overnight because support crews couldn’t make it to the home at Lake and Robertson streets before dark, police at the scene said.

As it was tipping, the crane operator could have dropped the tree. But there were people nearby, so that was deemed too dangerous. The long boom reaches far into a backyard from the street, and all six massive crane tires are suspended several feet in the air.

One or two more cranes will be needed to helpÂ fix the problem, and the homeowners planned to spend Wednesday night in a hotel. 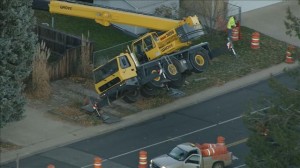 A Grove GMK3050 balances perfectly on the outriggers.

Thankfully no one is hurt. Â Looks like the tree or a home prevented the cranes from completely tipping over.