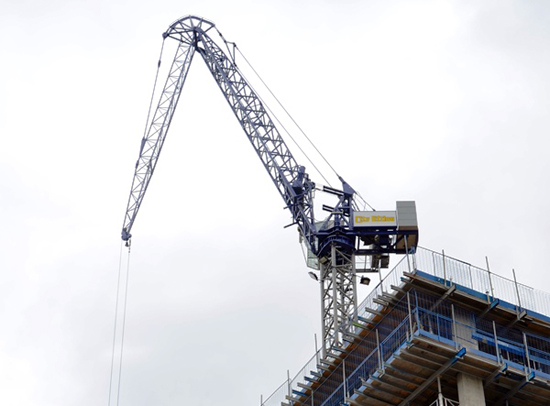 The tower crane business has suffered more than most in recent years. . Phil Bishop reports

The body blow dealt to the construction industry over the past five years has been well documented. Construction output has fallen 10% since 2008, from more than Â£10.5bn a year to less than Â£9.5bn, and the total industry workforce has shrunk by 20% from 2.6 million to 2.1 million.

Today, at last, every indicator points to recovery. And of all the indicators, none is more visible than the reappearance of tower cranes on the skyline.

When the economy first tanked in 2009, an estimated 50% or more of the UK tower crane fleet was lying idle. Today utilisation is back up to 75 or 80%. Rental rates, however, have yet to catch up.

In previous recessions, crane owners have reacted to a fall in demand by downsizing inventory, selling surplus machines out of the country. For tower cranes, this has usually meant the Middle East or Southeast Asia. This time it was different, however â€“ for several reasons.

This time the downturn was global. Not only was there no boom area to which to ship kit but there was a global over-supply as the biggest bust we had ever seen followed the biggest boom. Manufacturers had ramped up production to meet previously unprecedented demand, especially the Spanish producers Comansa, Jaso and Saez. Utilisation in the UK may have halved but it was even worse in Spain.

Add to the mix the new phenomenon of Chinese crane manufacturers in the world market. Many contractors in the Middle East or Asia that were still buying preferred new Chinese cranes to second-hand European ones for the same price.

Therefore even if a hire firm could find a buyer for its surplus cranes, the price was so low as to take any sheen off the deal.

For many, the only option was to hunker down in the trenches and wait for the storm to pass.

For these reasons, therefore, the size of the UK tower crane fleet today remains much the same today as it was five years ago. It is reckoned that there are in the region of 800 top-slewing tower cranes in hire fleets, with perhaps a further 200 or so directly owned by contractors such as McAlpine and Heyrod for their own use, or by industrial yards.

Six companies dominate the hire market, of which three are subsidiaries of contracting firms and three are independents.

Select, HTC and London Tower Cranes are respectively owned by Laing Oâ€™Rourke, PC Harrington and J Reddington. Falcon Crane Hire, Bennetts Cranes and City Lifting are well-established independent crane hire specialists. There are enough players to keep competition keen but the sector is small enough for all to know something about each otherâ€™s business.

There has been some change since the recession began. Lancsville Construction tried and failed to get into the rental business with Henry Cranes. Belgian giant Arcomet entered the UK market and left again (though will surely reappear if it sees demand). And just this summer Kier, one of the few remaining contractors with an in-house fleet, sold what was left of its cranes to HTC.

But that so much of the sector has survived the storm intact seems remarkable.

While Select has been able to ship its cranes around Laing Oâ€™Rourkeâ€™s international operations, the remaining hire firms have largely kept their heads down and tried to find a much work as possible for whatever rates can be attained.

City Lifting owner and managing director Trevor Jepson illustrates the challenge. Like most, he bought new equipment at the top of the market. When it is working, a new crane costs him Â£2,000 a month. When it is idle, it costs Â£6,000.

City Lifting is based in Essex and was helped by the fact that construction in nearby London never totally dried up.

In fact, the London market has been the saviour of many tower cranes over the past five years. HTC managing director Duncan Salt says that there is still a strong London bias in his workload, with 60% of his fleet within the M25, but he is now also seeing activity in the regions pick up. In recent months HTC has erected cranes in Nottingham, Bristol, Leeds and Manchester. Utilisation is running at a very healthy 80%, which is as high as he would want it to be. There always needs to be inventory left on the shelf to respond to new enquiries, after all. Turn a customer away and they might never come back.

Rental rates are a different matter, however. Last year yield was just 65% what was being achieved in 2008. Now it is about 75% of that figure, he says, which is moving in the right direction, but there are still some cranes out on legacy jobs at just Â£10 an hour, â€œwhich is pathetic,â€ he observes.

Salt says that the Kier purchase, which added 39 tower cranes, was â€œa cheap way to get cranes inâ€ at a time of rising demand. The deal also includes an attractive four-year sole-supplier agreement with Kier. Kier, incidentally, had already got rid of more than half its cranes in the past three years.

PC Harrington got into this business in 2002 by acquiring Hewden Wolff after Cat dealer Finning took over the Hewden group and had no interest in tower cranes. It has always been an exclusively Wolff fleet, and the exclusive UK dealer for German manufacturer Wolffkran. Through the Kier deal, HTC now has Potain and Liebherr cranes in its fleet, along with four crawler cranes and four rough terrain cranes, all on long-term hire. Whether these represent a starting point for HTC diversification, into both different tower brands and different crane types, remains to be seen. Salt seems open to the idea and thinks rough terrain cranes could be an interesting niche from which UK contractors could benefit.

Before joining HTC in February 2102 Salt was previously general manager of Select Tower Cranes. He says it might have made sense for Laing Oâ€™Rourke to use rough terrain cranes on the Heathrow Terminal Five project.

Knowing what cranes ought be used where is not as important, however, as having the cranes that customers actually want to use.

One of the biggest challenges of managing a business in a down market is keeping it in a fit enough shape to benefit from recovery. When you have a rental fleet, whether you are the market leader like HTC or an independent like City Lifting, you can never afford to completely stop investing in new equipment. Despite the obstacles, there always has to be an element of bringing in new and moving out old, even just to the scrapyard, to keep the business in a workable shape.

At HTC part of Saltâ€™s task is to ensure the fleet meets market needs. In the past 18 months he has bought 15 new Wolff cranes as part of fleet replacement. The overall fleet has remained at approximately 200 cranes, but the shape has changed. To meet the needs of the steel erectors on the big London commercial buildings, seven big 355B luffers have been added to the fleet, which can lift 28 tonnes close in and four tonnes out to a maximum reach of 60m.

HTC has also recently put up what Salt believes is the biggest tower crane in the UK, a Wolff 700B, at Costainâ€™s London Bridge station redevelopment. This crane can lift a maximum of 50 tonnes when reeved with three falls of rope, and 5.4 tonnes at a 70m radius. Two more of these will be joining it at London Bridge next year as the project progresses.

[Picture above are a mix of new Wolff 355Bs and traditional 320Bs at 5 Broadgate in London, where Mace is building new offices for UBS.]

Outside of London concrete frame construction predominates so the classic 180B is much in demand, lifting 2 tonnes at 55m on a single fall of rope.

Salt says that what is significant about the Wolff cranes is not so much how much they lift, since competitors also have big strong cranes, but the speed at which they lift. The 255Bs, for example, can lift a 14 tonne load at 100m a minute on single line pull. In his previous job, Salt was responsible for the cranes on Britainâ€™s highest building, the Shard. He says that Selectâ€™s Italian made cranes need double or treble reeving to compete, making them two or three times slower.

He also reckons the Wolff cranes are quicker to erect than Selectâ€™s Terex Comedils, since they are pinned together rather than bolted. Salt attributes this to Wolff having its own rental business in Germany and so having a closer feel for the rental market.

For Trevor Jepson, competing against bigger firms like HTC and Select requires carving out niches for himself. He has pioneered the UK use of truck-mounted tower cranes, for example. More recently, he has revived the old gooseneck concept with a modern take on the 1970s Magni cranes made in Sweden by Tornborgs. These articulated luffing jib cranes can keep the hook height at a constant level but bring the jib end in close when out of service. The level luffing concept used to be popular in construction before electronic hoist control made keeping hook height steady as easy as pushing a button.

City Liftingâ€™s modern version is the RaptorÂ (pictured below), made in Sweden by Artic Cranes. Jepson has been Artic Cranesâ€™s biggest customer since its foundation in 2009 â€“ to the extent that he now owns half the business. City Lifting now has six at work in London and a seventh in production.

The Raptor 84 can lift at speeds up to 40m/min. Maximum safe load is 4 tonnes out to 21m radius or 2 tonnes at 32m. More significantly, it 84 has an out-of-service radius of just 4m, which is a third that of regular luffing jib cranes, and a minimum working radius of just 1m, compared to 4m or 5m for regular luffers. Jepson believes that this will always give it a market for confined sites with over-sailing restrictions.

Clarke Design & Build is using a Raptor on a project at Elephant & Castle in London. Jepson says, because the 15m by 15m site is penned in by adjacent roads and rail lines that cannot be over-sailed, so not even a conventional luffing jib crane could work here.

City Lifting has had two of the Raptors for four years now so the financing is finally paid off and they can start to make a contribution to the business.

Despite good utilisation levels, crane rental companies will remain under intolerable pressure until such time as rates gives them a reasonable return. And those contractors who are reluctant to pay a reasonable rate, who are happy to settle for the lowest common denominator, and who demand crane owners give extras for nothing, have only themselves to blame the next time thereâ€™s an accident.

Cranes generally represent a tiny proportion of a projectâ€™s overall budget yet if anything goes wrong with them the consequential costs can be enormous. Maybe it is worth paying a fraction more.

After all, you only get what you pay for.

Recovery is coming just in the nick of time!! was last modified: October 17th, 2013 by Ron Selby