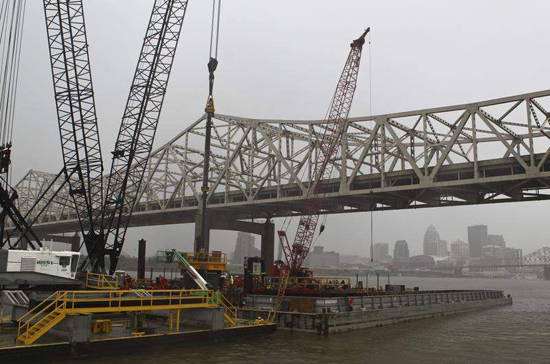 The first pieces of reinforced bar and steel are emerging from the Ohio River beside the Kennedy Memorial Bridge as work continues on the new downtown Ohio River bridge being built to carry northbound Interstate 65 beginning in late 2016.

Officials with the bridges project gave media members an up-close look at construction Thursday morning during a boat tour aboard the Spirit of Jefferson, including seeing drilling into rock in the riverbed to create the five in-river piers. Each of those piers will have four shafts drilled into the limestone beneath the river.

â€œThe work now is (creating) the foundation thatâ€™s underwater thatâ€™s supporting the tower pier that will come up out of the water,â€ said Max Rowland, one of the project engineersÂ and a spokesman for Walsh Construction, the firm building the downtown bridge. 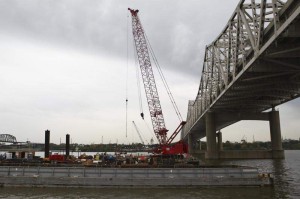 The Kennedy Bridge looms over the construction of the new bridge in the Ohio River. / By Matt Stone/The Courier-Journal

â€œWhen we get to that rock elevation, we have to go another 30 feet into it,â€ to secure the bridge, Rowland said.

The river bottom slopes down from the Indiana side to the Kentucky shore, he said, so the work on the piers closest to Indiana now â€œare the easy piers. I mean theyâ€™re the short ones. As we go toward Kentucky, theyâ€™ll actually be longer because the rockâ€™s deeper.â€

The rock is dense, meaning that the drilling for the shafts can be as slow as about 4 inches an hour, he said. â€œThatâ€™s hard,â€ he said.

Officials said the public will be able to see the three towers rising out of the river over the next year, with that work finishing late next year. 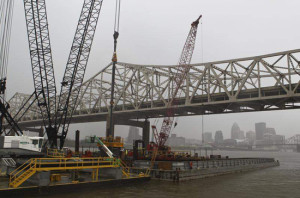 The city of Louisville looms in the background as pier drilling continues on the Ohio River for the new downtown bridge, scheduled to open in 2016. / By Matt Stone/The Courier-Journal