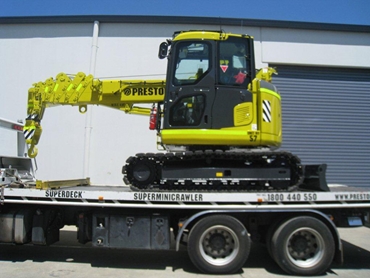 The Urban Superway in Adelaide is a joint venture between John Holland and Leed Engineering who were awarded the contract to design and construct the South Australian Government funded South Road Superway in northern Adelaide.

Mini crawler cranes specialist Preston Group supplied one of the larger models in their fleet, the Maeda LC-785 to install crash rail and sound wall steel structures being fitted to the Urban Superway in Adelaide. The brand new LC-785 is considered perfect for the job due to its pick and carry and 360Â° slew capability; the mini craneâ€™s narrow profile is also ideal for roadwork environments.

Adelaideâ€™s Urban Superway is the single biggest investment in a South Australian road project and the stateâ€™s most complex engineering road construction activity to date.