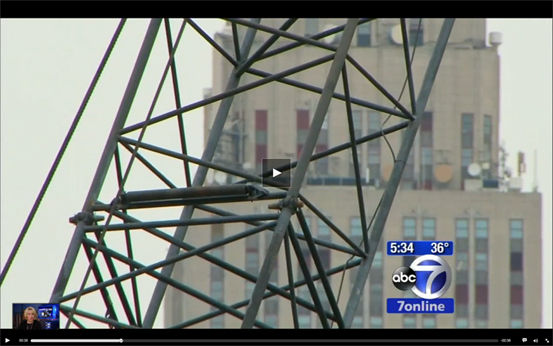 NEW YORK (WABC) –Â The Investigators are looking into crane accidents and the reforms put in place to prevent them.

The Buildings Department made changes, including stricter license requirements, but Eyewitness News found some crane operators are still cutting corners.

There were two fatalities last year and a crane collapse this year despite the city’s stepped up enforcement against unsafe crane operators, death and injuries continue.

Eyewitness News decided to take a closer look at how crane operators are cutting corners and putting New Yorkers at risk.

Most of the dangers posed by the 300 cranes that operate daily in New York City never get reported.

Documents Eyewitness News obtained through open records law show cranes are still routinely operating unsafely. There are dozens of examples; a crane so poorly set up it could cause the street to collapse, an operator who lost control and broke a window, and numerous violations for operating without a riggers license and using defective equipment.

“Making money and building skyscrapers out there is more priority to them than the safety of our people,” said Xhavahire Sinanaj, the victim’s cousin.

Xhavahire Sinanaj lost her cousin in the collapse of a faulty tower crane in 2008. She feels the violations we uncovered show the dangers still exist.

“How can we walk the streets in the city. Are we safe, what’s next?” Sinanaj said.

Last year, two workers were killed in separate crane accidents in the city. And who can forget the dangling Midtown crane during Superstorm Sandy. Eyewitness News’ investigation has found this wasn’t the only crane not safely secured. This site got a violation for having no approved safety measures for its tower crane during Sandy.

Crane operators throughout the city cut corners in 2012. Records show a crane in danger of tipping over at the new police academy, “putting the risk of workers being hurt or killed extremely high.” During construction of this building, an inspector caught a crane operator making numerous lifts of heavy material “over an occupied work trailer with people inside”.

Construction Safety Attorney Susan Karten blames the continued accidents on a lack of accountability, starting at the top, from a Buildings Department immune from legal action when cranes collapse.

“There is no real oversight. There are not enough people in the field. Not enough follow up,” Karten said.

The city disputes that, saying it has hired more and better trained inspectors, has stricter crane licensing requirements, and has fewer old, rickety cranes in operation. All of this is paying off, says the city, with not a single crane fatality this year.

Still, records show risky operations continue; 27 times last year, the city found cranes in use without a license or certification, and, operating in an unsafe manner or with defective equipment 30 times.

“Not only business as usual, but this means that there is no follow up. We don’t know if people are closing down these cranes after they find these violations. This is a bunch of paper,” Karten said.

In a statement sent to Eyewitness News, the buildings’ commissioner says, “The city enforces crane regulations more stringently than anywhere else in the world.”

They have revoked or suspended the licenses of at least 21 crane operators in the last five years.