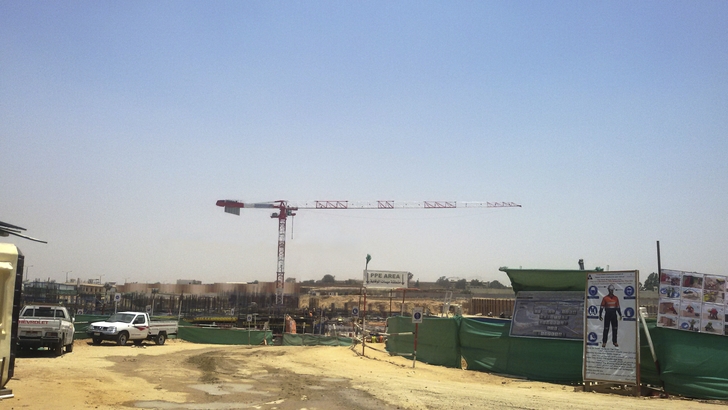 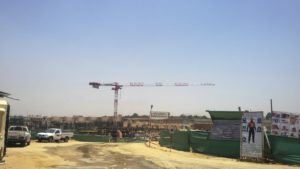 The first Potain MDT 389 cranes in the Middle East are constructing one of the largest retail malls ever built in Egypt – the Almaza City Centre project in Cairo. A joint venture between Hassan Allam Sons and Consolidated Contractors Company (CCC) is managing the construction work.

Hassan Allam Sons purchased the four 12 tonne maximum capacity Potain MDT 389 cranes for the job after the model was launched globally at the BAUMA 2016 show in Germany. The cranes were bought from International Development Programmes (IDP), the exclusive dealer for Potain in Egypt. IDP managed the assembly of the cranes on site with assistance from the local Potain technical support team. The first crane was erected in June 2016 and the fourth was completed in August of that year.

The MDT 389 cranes are lifting concrete and steel to heights of up to 40 metres, with loads weighing up to 3.5 tonnes. Engineer Atef Ramzy, plant, machinery and vehicles manager for the joint-venture organization, said, “Compared to other tower cranes we used in the past, the MDT 389 is much easier for our operators to control, because it has the Crane Control System (CCS) technology.”

Mahmoud Anees, sales manager at IDP, added, “The new MDT 389 models are very easy and quick to set up, and we assembled all of them with the assistance of a Grove RT770E rough-terrain crane.

“The jib and counter jib design on the MDT 389 is really nice and user-friendly, making it easier and faster to put the cranes to work. Our after-sales team are visiting the site every week to check the cranes and ensure they are in top operating condition.”

The cranes on the mall project have been fitted with 75m jibs and are set with working heights of around 50m. The inclusion of CCS on the MDT 389 delivers significant benefits in both installing and operating the cranes.

There are two versions of the Potain MDT 389, one with a maximum capacity of 12 tonne and the other at 16 tonnes. Both have up to 75m of jib available, and the 12 tonne version can lift 3.4 tonne at its jib end, while the 16 tonne version can handle 3.3 tonnes.