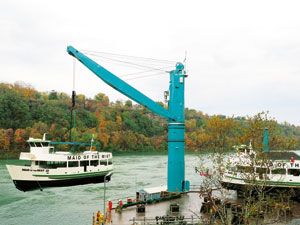 The latest installation by crane manufacturerLiebherrÂ is a little different to the usual run of gantry and mobile harbour cranes which service the container vessels and general freight ships around the worldâ€™s coasts. This time the unit has been specifically designed to list the ships themselves! When the new dry dock facility on the US side of the famous Niagara Falls in New York State needed equipping it turned to the company to come up with a suitable solution.

With a lifting capacity of 200 tonnes at a radius of 15 metres, the crane is the first Liebherr Fixed Cargo Crane (FCC) for the heavy lift segment and its first job, completed on the 31st October, was lifting passenger tour boats out of the water for the famous local companyÂ Maid of the Mist. Designed as a wire-luffing crane, the FCC is fitted on a fixed pedestal and has a dead weight of approx. 143 tonnes with a maximum outreach of approximately 24 metres. And in order to match the colour of the water of the Niagara River, the crane had to be painted turquoise!

Before the crane could be installed on the dockside, it underwent a long journey. Produced in the Liebherr production plants Rostock (Germany) and Sunderland (UK), the crane was loaded onto a ship in the German Port of Brake at the end of August to be transported across the Atlantic Ocean. From Hamilton, Ontario (Canada) the crane was then driven by road to the site at the Niagara Falls. However, the last part of the journey appeared to be the most challenging one. The dockside facility is located in a gorge with only limited road access so an alternative had to be found to get the crane to its final destination. Hence, at the end of September the FCC into the gorge for final assembly.

The FCC provides an economical as well as space-saving solution for installation on quaysides having to perform well in all conditions such as high winds and ice, something stipulated in the order from Maid of the Mist and another requirement was for fast and smooth serviceability which Liebherr says is made possible by the groupâ€™s dense sales and service network on the American continent.

The Niagara Falls on the border between the United States and Canada are one of the most spectacular natural sights worldwide with more than 18 million visitors each year. Maid of the Mist runs a fleet of passenger boats, each for up to 600 persons, which bring many of the visitors to the bottom of the falls and all of which need to be lifted both into the waters of the Niagara River in spring and back out again at the end of each season for maintenance and winter storage.

Despite instantly being put into action construction works on the facility will continue in the next couple of months, with a projected completion date in the third quarter of 2014. The total investment sum for the new dockside is about $32 million and Kevin Keenan, a spokesman for Maid of the Mist, commented that the installation of the new crane represented a symbol of the progress the construction crews were making on the new facility.

Photo: The new crane in action.

One Dockside Crane Which Will Never See a Shipping Container was last modified: November 15th, 2013 by Ron Selby