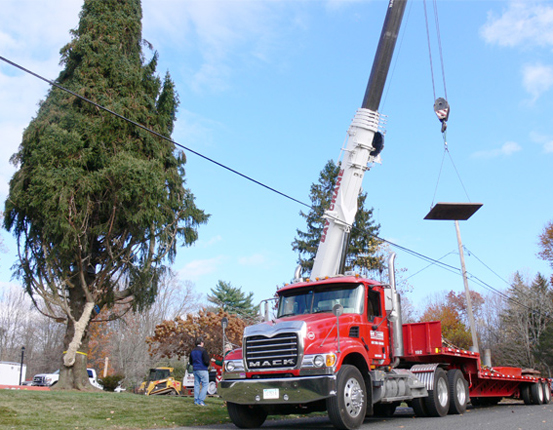 Bay CraneÂ is on the job lifting the 12-ton tree set for Rockefeller Center.

A large crane and long flatbed truck now are positioned at the site of the Shelton tree that will be cut down and transported to Rockefeller Center for the holiday season.

The heavy equipment was moved to Kazo Drive on Wednesday, with workers placing the crane in the yard and parking the truck on the street directly in front of the tree. Wooden and metal platforms also have been set up in the staging area.

Plans are to cut down the tree at 9 a.m. on Thursday. It will be moved by crane to the waiting 115-foot-long truck and driven to Manhattan, where it later will be decorated and put on display.

The tree will be erected in Rockefeller Center on Friday. This yearâ€™s tree-lighting ceremony will take on the evening of Wednesday, Dec. 4.

For much of the past week, tree workers could be observed methodically pulling back and tying branches on the tree with ropes to make the tree less wide so itâ€™s easier to move. This â€œwrappingâ€ process was completed on Saturday.

Workers set up the staging area for the crane.

According to publicity material for Rockefeller Center, the Norway spruce is on the property of the Vargoshe family. It is 76 feet in height and 47 feet in diameter, and weights 12 tons. It is believed to be between 75 and 80 years old, and nearing the end of its life cycle.

People who have spoken to Vargoshe family members said the tree originally was used as a balled indoor Christmas tree by a previous owner of their Kazo Drive house.

After the holiday that year, the homeowner planted the tree in the front yard. It is believed this occurred in the late 1950s or early 1960s.

â€œThis tree will be symbolize Christmas for the entire world in a few more weeks,â€ Peters said. â€œIt will be the most famous tree in the world in a couple of weeks. Itâ€™s one of the biggest things that could happen to this neighborhood.â€

An earlier view of the Kazo Drive tree after it had been â€œwrappedâ€ for the trip to New York City.

Cathy and Bill McDonald ofÂ MilfordÂ traveled to Shelton to check out the tree on Wednesday. â€œI have a thing where if the [Rockefeller Center Christmas] trees are from Connecticut, I want to see it,â€ Cathy McDonald said.

â€œTo us, Shelton is Jones Tree Farm so where better a place for the Rockefeller Christmas tree to come from,â€ she said.

Looking at this yearâ€™s selection, Cathy McDonald commented, â€œI can see why they picked it.â€