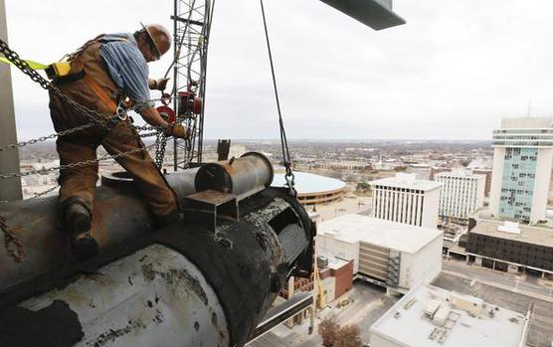 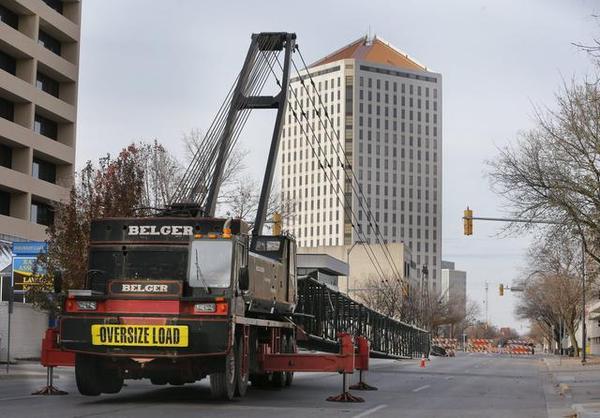 Main Street between Douglas and First was closed Saturday so a giant crane could install an air-conditioner unit near the top of the 19-story former Executive Center. The work had to be postponed until Sunday morning because of high winds. (Nov. 23, 2013) Fernando Salazar/ The Wichita Eagle

The wind slowed enough so that a crew using a crane could lower a stripped-down, 4,000-pound air conditioning unit 19 stories from the former Wichita Executive Center, 125 N. Market. Then they used the same crane on a blocked-off street to lift a new unit, weighing nearly 12,000 pounds. 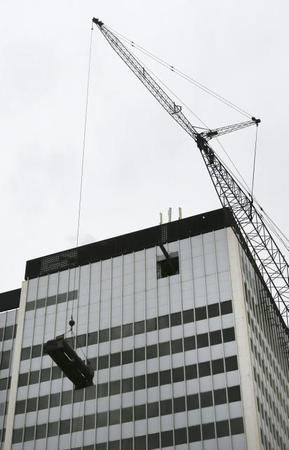 The really time-consuming part, said Kurt Myers, was carefully moving the old unit out of a window onto the crane and easing the new unit into the building. When something weighs that many tons, you canâ€™t afford to jerk it around, especially up that high, said Myers, the project manager with Belger Cartage Service, an industrial moving company.

Crews had planned to do the job the weekend before, but gusty winds prevented it.

The job entailed having a crane arm up 270 feet, transferring the equipment through a large window that was up 225 feet. The crane is operated by a two-person crew. Following is a summary of the tricky job as Myers described it.

First, the old chiller, which is essentially made up of barrels of copper tubing, had to be rolled on dollies or â€œskates,â€ which are heavy-duty industrial wheels on very strong axles. The old unit had been stripped down to the point it had about 4,000 pounds remaining to come out the window. A crew of four iron workers used steel-rope slings to pull the old unit out to the crane hook. There couldnâ€™t be sudden jerks, or it might have compromised the rigging on the crane.

The workers making the transfer were pushing by hand at times and using winches and rigging, and by law they have to be secured by a â€œfall protection systemâ€ that involves body harnesses.

When the new equipment came into the building, that was tricky, too. Again, it weighs almost 12,000 pounds, and at one point during the transfer, it rested on the skates on the building end as the crane guided it in. Part of the care was to keep the weight from rolling back toward the crane.

â€œSo it goes very slowlyâ€ to keep it in sync, Myers said.

Then once inside, the new equipment had to be eased down by jacks off of the skates and onto the concrete floor.

At one point, the new equipment was going to be moved with the help of I-beams, but that configuration would have been too tall to fit through the opening.

The transfer took about five and a half hours Sunday.

David Mitchell, an iron worker with Belger Cartage Service, works to remove a 4,000-pound air conditioning unit from the 19th floor at 125 N. Market, the former Wichita Executive Center. Workers slowly pushed it out using â€œskatesâ€ and winches, and then a crane with a 270-foot boom arm lowered it to the ground. (Nov. 24, 2013)

â€œThe key to all this was the foreman, Barney Baker,â€ Myers said. Baker was responsible for keeping everyone safe, Myers said.

Kerry Hansard is owner of Kansas Controls, the mechanical contractor that is responsible for making the new cooling equipment operational. Hansard monitored the equipment transfer and said he appreciated the job done by Belger â€“ â€œTheyâ€™re so professional,â€ taking plenty of precautions, Hansard said.

The new chiller had to be moved 30 feet across the floor, and with something that heavy, it canâ€™t be dropped even a half-inch. The trick is to keep it level, Hansard said. 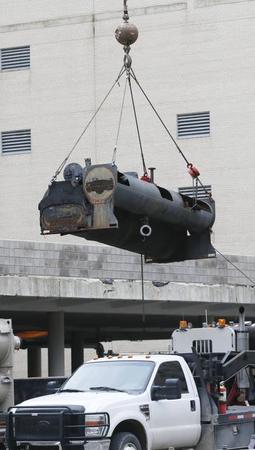 During the big job Sunday, the workers and monitors missed the Chiefs game.

But Hansard said his mind was busy with the moving project.

â€œThe Chiefs game was the furthest thing from my mind,â€ Hansard said.

Knightsen: Crane tips over on Highway 4 in Cali