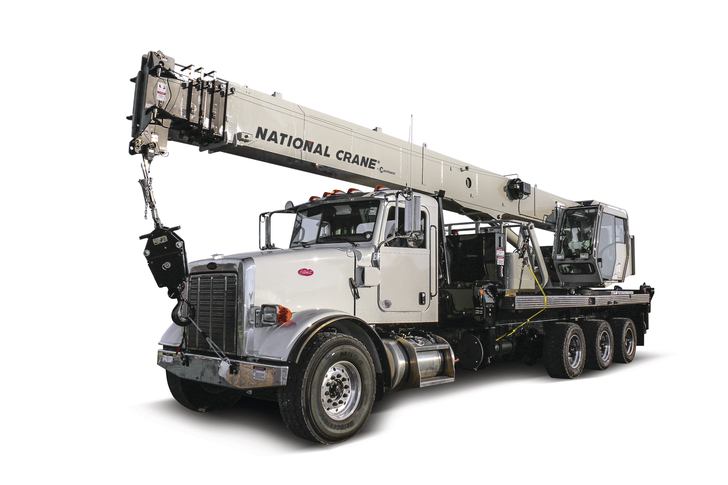 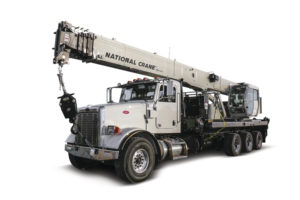 National Crane will show off the new NBT40-1 Series of boom trucks at next March’s ConExpo show in the USA. It comprises three models, NBT36-1, NBT40-1 and NBT45-1.

Equipped with the new aerial package the series is aimed at the utility market. It is designed to enable companies to perform crane lifting and aerial lift projects more efficiently with just one machine. The updated series offers performance enhancements for the core crane markets as well, the company said.

Fully compliant with ANSI/SAIA A92.2 aerial lift and ASME B30.5 mobile crane industry standards, as well as OSHA standards, the NBT40-1 Series will result in higher utilization and less setup time, the company said.

Manitowoc will offer an aerial lift “Train the Trainer” training program in a bid to ensure that the dealer network and customers are aware of their responsibilities regarding the safe operation, inspection and maintenance of their equipment.

The new dual-rated NBT40-1 Series will be especially useful for the utility sector, where energy work on de-energized power lines and new transmission infrastructure construction often require the use of both a crane and an aerial lift. All three models have the option of a two-person, 1,200-pound maximum capacity, quick-attach yoke platform with wireless radio remote control.

Justin Pilgrim, global product director for boom trucks and carry deck cranes at Manitowoc, said the new NBT40-1 Series will improve fleet utilization for many companies and provide more versatility for their investments.

“With these new models, customers will gain the benefits of having both a boom truck and aerial platform in just one package, potentially cutting their need for two or more machines down to one,” he explained. “The dual-rated NBT40-1 Series offers the best of both worlds with straightforward setup, clear steps to reconfigure as an aerial lift, and simpler, smarter operation when in use, thanks to features such as operator feedback of operating height and reach; automated function slowdowns when nearing outer edges of working envelope; wind speed; an emergency lowering system in the event of an engine failure; and many other utility-focused options.”

The 161-foot boom length offers the highest platform working heights of 169 feet on the main boom and 206 feet on the jib and is well suited for the most demanding aerial lift applications while delivering solid crane performance, the company said. The 142 foot boom features strong lifting capacities and aerial lift platform floor height of 150 feet with the main boom and 205 feet with the jib extended.

A hydraulic tool circuit in the aerial platform enables operators to hook up various high-pressure tools without the need for any additional equipment placed in the platform. An available integrated wind speed sensor provides real-time feedback of wind speed conditions to the operator—both at the operators cab and at the aerial lift platform controls.

Updates include a graphical rated capacity limiter (RCL) that simplifies set up for both the crane and aerial modes. Other attributes include new strengthened aluminum decking, a swing-out cab access ladder and second removable ladder to allow access at several locations around the machine, and lighter polymeric outrigger floats that reduce operator fatigue and prevent theft at the jobsite.

“At Manitowoc, we continue to stay in touch with our core markets and identify their evolving lifting needs,” Pilgrim said. “The utility and infrastructure markets are solid, growing sectors. We are committed to providing these markets with lifting solutions that will help them increase the utilization of their equipment and ultimately improve the return on their investment. The NBT40-1 Series reflects The Manitowoc Way in action.”

The NBT40-1 Series replaces the former NBT40 Series that included the NBT36, NBT40 and NBT45. The new series will be available in the first quarter of 2017.