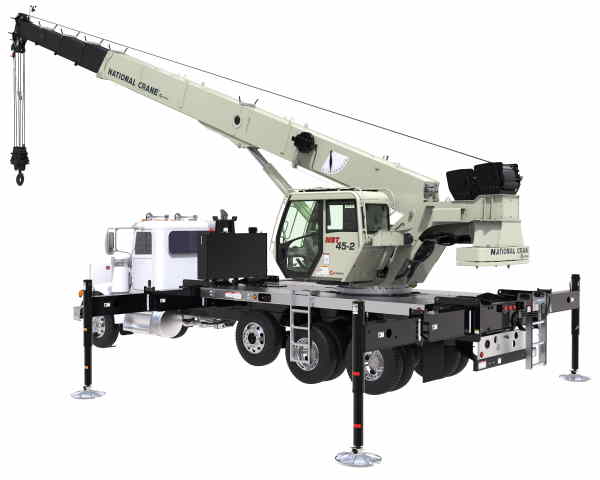 National Crane has launched a new addition to its popular NBT boom truck range with the NBT40-2 series. It will be on display at CONEXPO 2020 in March, and it’s one of six new cranes that will make their tradeshow debuts from Manitowoc at this year’s show. The new NBT40-2 series is proudly American-made, manufactured at the company’s factory in Shady Grove, Pennsylvania.

National Crane boom trucks are a popular choice with contractors for their versatility and comfort, as well as class-leading features. The NBT40-2 series is a combined re-engineering of the reliable NBT40-1 series and popular NBT50L series, by upgrading the product in terms of capacity, reach, comfort and advanced features while maintaining the same overall weight as the NBT40-1.

“The NBT40-2 series continues the evolution to the next generation of boom trucks started with the NBT50L Series,” said Bob Ritter, product manager of boom trucks at Manitowoc. “It’s a complete re-engineering of our boom truck series, and it improves on many aspects of its predecessors, providing the strongest and most competitive load charts available for a 40 USt or 45 USt boom truck with no increase to the GVW of the crane. With two options for capacity and reach, we’re providing customers with options that suit their specific needs. It’s another example of Manitowoc’s Voice of the Customer product development process in action.”

The turntable and torsion box have been redesigned for a solid feel, even when lifting out at the extents of the load chart, and the boom has been re-engineered for increased boom stiffness to maximize load chart and minimize flex. A redesigned, fixed counterweight system has enabled National Crane to optimize the capacity of the boom truck, ensuring it has best-in-class load charts while remaining weight neutral compared to its predecessor.

These specifications make this crane ideal for work in the commercial or residential construction industries, due to its versatile boom lengths and excellence in close charts or capacity at reach. It’s also ideal for the utility or tree service industries, especially when needing 200 ft (61 m) plus of platform height. The tree service industry in particular will find the crane suitable for its rugged design with great capacity and long reach.

This NBT40-2 boom truck series also raises the bar in operator comfort, coming standard with a hydraulically tilting cab and a heated operator seat. Also standard is a front-bumper-mounted SFO and hoist control. This series has the option for wireless outrigger controls, as well as four position outriggers that enable quicker and easier setup for increased efficiency. It has an easy to use color graphical display and real-time diagnostics for simplified troubleshooting without the need for a laptop. Additional state-of-the-art features include electric hydraulic controls with speed adjustability, an optional multiple camera system for increased job site visibility and a fully integrated wireless wind speed indicator.

The NBT40-2 series shares several traits with the NBT50L series, including its electrical and controls architecture. The commonality between these two models will minimize operator and technician training for users of both products, as well as provide easier maintenance and parts access compared to its predecessor